UK cities including London not as ‘smart’ as global counterparts

Major cities in the UK are falling behind their international counterparts in terms of their use of smart technologies, according to a new study from the University of Sheffield.

The research has found that smart cities in the UK, such as London, are not as advanced as the leading smart cities across the globe, such as San Francisco, Barcelona and Amsterdam, because of a lack of citizen engagement with new smart technologies.

Smart and sustainable cities are essentially built by utilising a set of advanced information and communication technologies – such as broadband networks, wireless sensors, cloud services and mobile apps – to generate radical new ‘smart’ services and facilities within a metropolitan area. 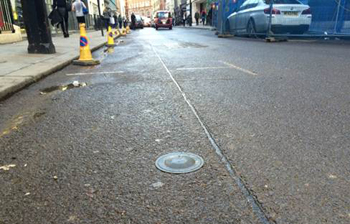 A recent report by the UK’s Department of Business, Innovation and Skills valued the smart cities industry at more than $400 billion globally by 2020, with the UK expected to receive a 10 per cent share.

The research team, led by Dr Alex G.C. Peng from the University of Sheffield’s Information School, together with research assistants Luqing Zheng and Ricardo Cardoso Ortegon, found that citizen engagement is severely affecting the rate at which British cities are becoming ‘smart’.

The Sheffield researchers specifically focused on London – one of the smartest cities in the UK- and its new smart parking service. The system aims to improve traffic congestion by helping drivers find a free parking space in the West End area by using an app that is connected to sensors located within parking bays. The sensors provide data on whether each individual space is vacant or not allowing drivers to see a real-time map of parking availability and be directed to an empty space.

“Our study found that from more than 100 randomly selected people who regularly park their cars in London’s West End, 85 per cent of them had never or very rarely heard about the service and 70 per cent said they know nothing or very little about the functions and usefulness of it,” said Dr Peng, the study’s lead researcher.

“In addition, just over 78 per cent of respondents said they never or rarely use the app to look for parking availability in the West End.

“These results show that the majority of citizens are not fully aware of the existence and usefulness of the smart parking service that has been available since 2012, and their daily usage of this smart service has also been extremely low. As a consequence, and despite the substantial investment being made, citizens are not gaining the full benefits from this service.”

The parking app in London was given the Parking Technology Award at the 2014 British Parking Awards and the Innovation Award at the 2013 Tech Success Awards, and is an example of how ‘smart’ information and communication technologies can be used to improve the living experience of residents and visitors to cities throughout the world.

Research from the Sheffield team found that successful usage of the parking app can potentially bring substantial economic and environmental benefits to both the city and Londoners.

Despite the low usage of the app at the moment, the research showed that for those who used the service they can save an average of more than seven minutes each time when looking for a parking space. This in turn can lead to an average saving of £30 worth of fuel (24 litres of petrol) and reduce CO2 emissions by 62.5kg per driver per year.

The study also shows that if drivers become fully aware of the smart parking service each driver will have the potential to save an average of more than £115 (85 litres) on petrol and reduce CO2 emissions by 219.82kg per car per year. At city level, a smart parking system could help London save £266 million worth of petrol per year and reduce its annual CO2 emissions by 505,000 tons.

Dr Peng added: “Smart technologies such as the parking app in London have huge potential to improve everyday life within cities, but at the moment, a major barrier to deploying these technologies and push British cities into the next technological generation is a lack of citizen engagement.

“Imagine if the citizens of Hill Valley in Back to the Future had not engaged with Hoverboards and self-lacing shoes, or utilised real-time data to navigate their skyways – Marty McFly would never have saved Doc Brown from plunging into Clayton Ravine or prevented his son from committing a life-changing robbery with Griff Tannen.

“In San Francisco for example, their use of smart parking has led to a 30 per cent reduction in both vehicle miles travelled and greenhouse gas emissions from cars circling.

“Overall, the technologies to enable British cities to become truly smart already exist, but citizen engagement with these will determine whether the promises of smart cities such as London can finally become realistic. It should also be highlighted that the citizen engagement issue does not only exist in UK cities. In fact, there is increasing evidence to show that this is a crucial challenge affecting the success of smart city initiatives worldwide”