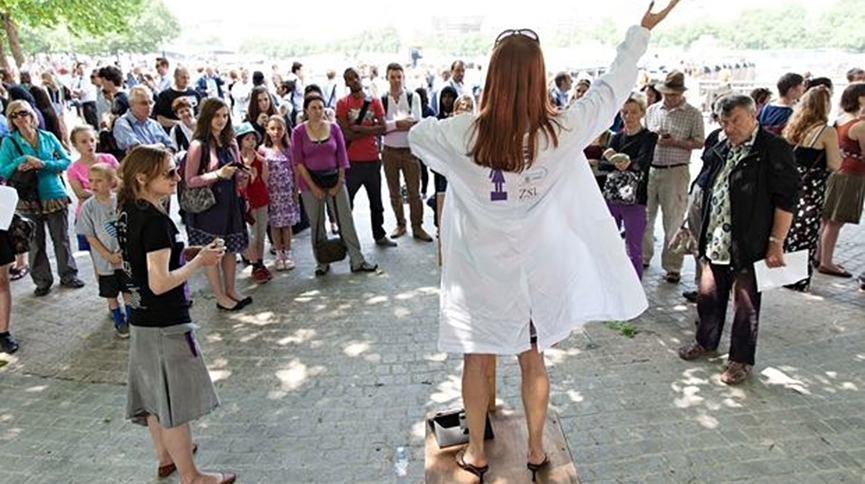 An event featuring talks from female academics at the University of Sheffield will highlight research from women in STEM (Science, Technology, Engineering and Mathematics), aiming to inspire a new generation.

Soapbox Science is taking place on Saturday 22 September outside The Moor Market in Sheffield City Centre and is open to all and free to attend.

Talks will cover a variety of topics from cosmic explosions to stem cells and Star Trek to peanut butter. Speakers will be representing different areas, including Physics and Astronomy, Animal and Plant Sciences, Bio-Medical Sciences and Civil and Structural Engineering.

The event aims to highlight the research being conducted by women at the University of Sheffield’s STEM departments and bring their work to a wider audience, including those that may not usually be engaged in science.

Dr Claire Esau, the organiser, said: “Soapbox Science is almost science-based busking, aiming to draw in audiences who may not ordinarily attend a science event or even consider themselves interested in science.
“This event gives women in science and engineering a platform to promote their work and to challenge stereotypes - there is no such thing as a 'typical' scientist. I want to encourage more females, of all ages, to consider a career in science.”

Heloise Stevance, a PhD student in Astronomy, said: “In this talk, the crowd will learn how stars live and die, and how their deaths create some of the most powerful explosions in the universe, called supernovae, and how this amazing phenomenon releases the stardust that our planet, our bodies and everything around us are made of.

The talks will give people the chance to meet the scientists and learn about their work through stories, discussions and interactive props whilst showing the diverse range of women working in science.

Dr Esau, from the University’s Department of Physics and Astronomy, said: “There is a gender imbalance amongst professional scientists and engineers which increases further with seniority. Some young children I’ve spoken to have said that they've never seen a female scientist before. The preconception that only men can be scientists needs to be tackled from an early age.

“Girls can be incredibly self-conscious, and thinking that science is a 'boy subject' can put them off. We need to increase the visibility of women in science to show girls, and even their parents who can strongly influence their children's interests, that scientists can be absolutely anyone from any background.”

The afternoon will see 12 women step up to soapboxes to discuss their research. A full list of the talks being given on the day can be found below:

Unified by the power of discovery and understanding, staff and students at the university are committed to finding new ways to transform the world we live in.Sheffield is the only university to feature in The Sunday Times 100 Best Not-For-Profit Organisations to Work For 2018 and for the last eight years has been ranked in the top five UK universities for Student Satisfaction by Times Higher Education.