A research group at the University of Sheffield has developed a solar forecasting service, helping to increase the efficiency of the electricity system and reduce energy costs.

Sheffield Solar, based in the Department of Physics at the University of Sheffield, has developed a service which provides forecasts for energy generation from photovoltaic (PV) systems in the UK for up to 72 hours ahead. 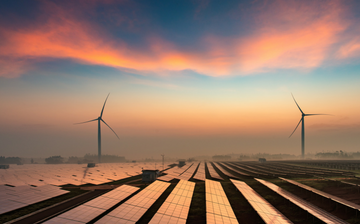 The tool is intended for electricity grid operators as well as energy generators and traders. With the rapid uptake of solar photovoltaic systems, there has developed a growing need to accurately measure and forecast solar’s impact in order to mitigate its disruption on the electricity network.

Renewable energy has continued to break records this year, as reported in the national press, for example by generating more than 50 per cent of electricity demand one lunchtime in June and with solar contributing a quarter of demand in late May. This highlights the need for greater monitoring of our energy sources, to balance renewable sources with other generating technologies, energy storage and interconnectors, as we move towards a smart grid.

As solar cannot be controlled, it affects the balance of supply and demand in the electricity grid. Uncertainty in forecasting PV results in the need for standby generators to provide additional reserve capacity, making it more expensive to manage the grid, but with accurate forecasts the amount of reserve can be reduced, cutting costs for National Grid and so the bill payers.

For the past two years, Sheffield Solar has been working closely with National Grid to develop a tool which estimates the real time generation from PV systems in Great Britain. This is used in National Grid’s control room to help to balance the supply of energy with demand. 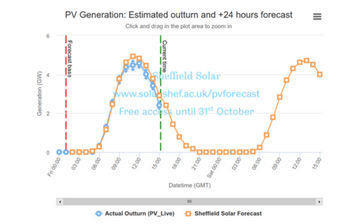 The new service takes things a step further, in providing National Grid and other energy managers with a short term forecast, so that they can better plan ahead in deciding which generators will be required throughout the day. It combines weather forecast data with the data from live generating systems to provide a forecast for the next seventy two hours. With frequent updates it ensures that stakeholders always have a high quality forecast at their fingertips.

The service is currently being trialled on the University of Sheffield's Sheffield Solar website. The group has plans to develop the service with researchers initially releasing a half hourly forecast, followed by a regional forecast and finally they intend to provide forecasts for individual systems around Great Britain.