Students from the University of Sheffield have won a prestigious international competition to develop a low-cost telescope to be lifted into space by a helium balloon to observe the Sun. 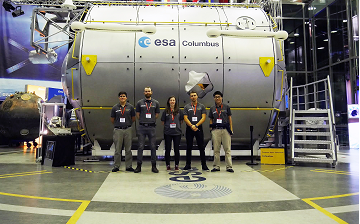 The telescope will be hoisted up into the Earth’s lower atmosphere, called the troposphere, to observe the Sun by a high altitude helium balloon.

By lifting the balloon 30 - 40 kilometres above the surface of the Earth, the SunbYte telescope will avoid the distortions produced at higher levels of the atmosphere and produce higher quality imaging than traditional ground-based solar observations.

The team, dubbed SunbYte (Sheffield University Nova Balloon Lifted Solar Telescope), will use innovative manufacturing techniques such as 3D printing to make their design come to life and to produce an alternative to large and expensive telescopes.

Knowledge of the Sun’s dynamic atmosphere is crucial for understanding its interactions with the Earth and the local space environment, known as Space Weather. Images captured by the team will be of important scientific value.

Yun-Hang Cho said: “What excites me about project Sunbyte is the potential for protecting our way of life. The knowledge gained will enable us to develop effective defences against solar flares and expand our knowledge of the universe.”

He continued: “Sunbyte places the involved University of Sheffield students at the forefront of science and engineering, giving them the chance to learn through experience. I am very proud of the work everyone has delivered and hope to continue leading them to success.”

The balloon is due to be launched in October 2017 from the Esrange Space Centre in Northern Sweden.