A pioneering mission to measure the Earth’s forests from space, conceived by an international team of researchers led by the University of Sheffield, has moved a step closer to launch following the signing of a contract to build the technology. 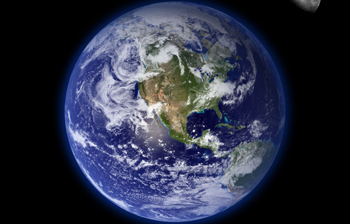 The BIOMASS mission, led by Professor Shaun Quegan from the University of Sheffield’s School of Mathematics and Statistics, will use a revolutionary radar system to create a 3D map of the world’s forests in order to improve our understanding of how carbon is cycled through the Earth system.

The mission’s data will strengthen research into climate change and may be used as a reference point by nations negotiating treaties to better manage forests across the planet.

Airbus UK will lead the construction of the satellite that will carry the radar system in space. This system will measure the amount of woody biomass – mainly contained in trunks and large branches –in the world’s forests, together with their height.

BIOMASS, which was proposed by Sheffield’s Professor Shaun Quegan will launch in 2021 as the seventh mission in the European Space Agency’s (ESA) Earth Explorer programme.

The Earth Explorer programme aims to study the whole Earth system: the interactions between the Earth’s atmosphere, biosphere, hydrosphere, cryosphere and the planet’s interior as well as the impact that human activity is having on the Earth’s natural processes.

Professor Quegan said: “This mission will give us unprecedented insight into the structure of forests across the world and how changes in forests, both losses from deforestation and gains due to regrowth and reforestation, are affecting the amount of carbon dioxide going into our atmosphere.

“The study will essentially weigh forests – it will tell us their weight and height, and we will be able to see how they are changing over time.

“Understanding how the amount of living material – biomass – in our global forests changes over time is necessary for improving present and future assessments of the global carbon cycle, and therefore our climate.”

Currently, most estimates of biomass come from ground-based measurements. But because these measurements are scarce, particularly in the tropics, the models give radically different projections of the future carbon cycle and, therefore, how the climate might change.

The BIOMASS mission will help overcome this problem, by providing frequent, accurate and consistent biomass measurements, helping to validate and improve current earth system models. It will do this by using a 70-centimetre wavelength radar sensor to probe both the height of forests and how much wood they contain at a scale of 200 metres.

As well as giving unparalleled and accurate insight into forest biomass, this mission should provide information on ice-sheet motion, the Earth’s upper atmosphere and subsurface geology in arid regions.

Despite being a space mission, the success of the project rests on the active involvement of scientists collecting biomass measurements on the ground. Their data will be invaluable when the mission launches to check, test and verify the accuracy of the data the mission delivers.

Between now and launch Sheffield’s Professor Quegan will work with ESA, Airbus and the BIOMASS Mission Advisory Group (key scientists from several European countries and the US) to address science issues underpinning the mission.

These include calibration of the radar measurements to make sure they are accurate and not distorted by the ionosphere; formulating how to combine the different radar modes with ground data and measurements from other satellites to produce the best possible estimates of biomass; and exploiting biomass data in Earth system models to improve our understanding of the Earth’s carbon cycle.