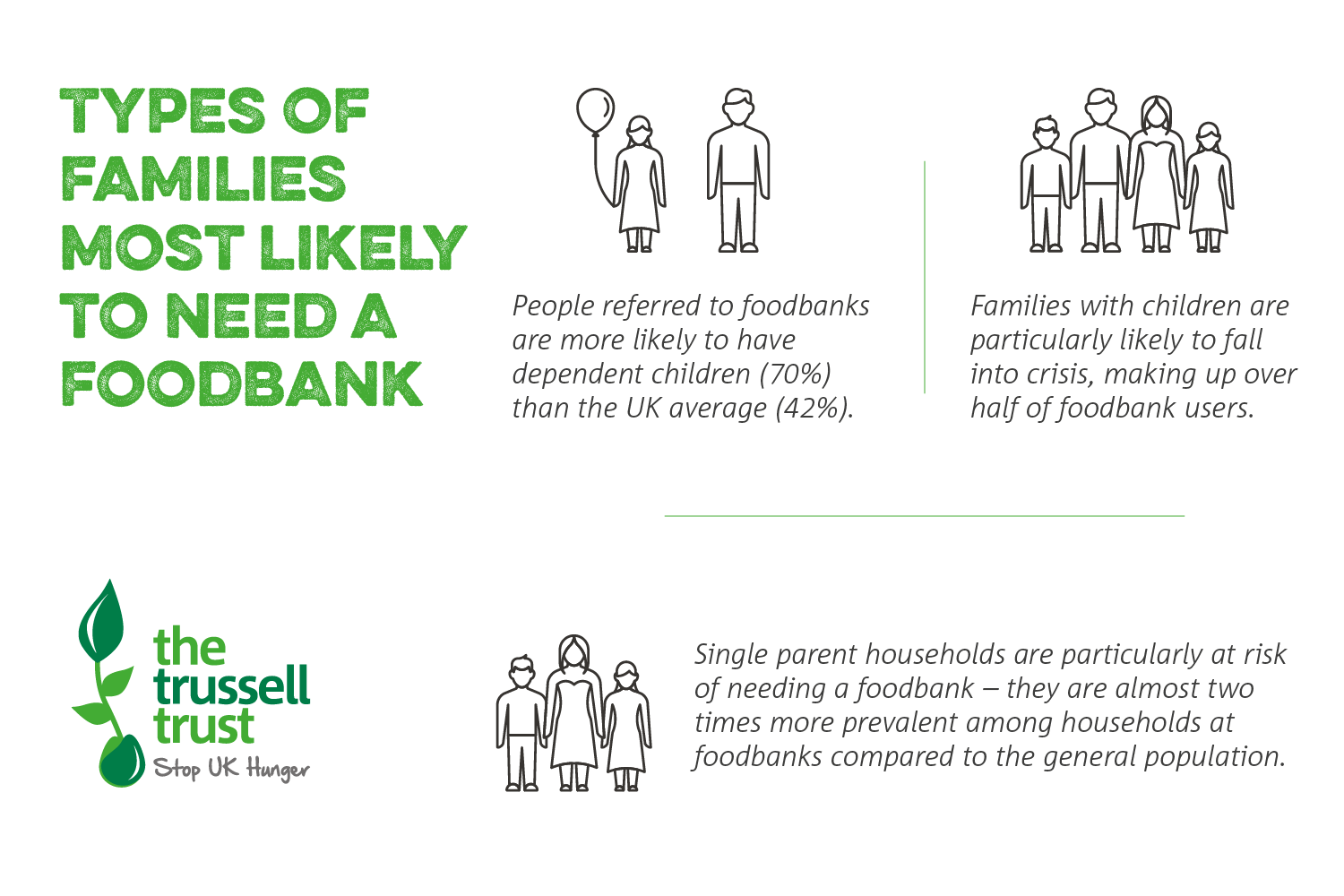 Analysis by the Sheffield Political Economy Research Institute (SPERI) at the University of Sheffield has shed new light on the type of families using foodbanks in The Trussell Trust’s network and highlights that families with dependent children are more likely than other family types to use foodbanks.

More than 80 per cent of families with children at foodbanks were classed as severely food insecure (meaning they had skipped meals and gone without eating, sometimes for days at a time) in the past 12 months because of a lack of money. It is known that severe experiences of food insecurity underlie foodbank use, and this was clearly the case for families with children.

Despite 31 per cent of couple families and 21 per cent of single parent families including a working adult (compared to 15 per cent of households at foodbanks), employment did not adequately protect households from needing a foodbank. The equivalised average household income for families with an adult in work was just £419 for the month before needing a foodbank, and while this is significantly higher than the figure for families without work (£277), this is well below the low-income threshold for the UK (£1,050 a month after housing costs).

There were clear differences in the issues affecting single parent and couple families. Although both single parent and couple families reported experiencing rising or unexpected costs in the past three months, single parents at foodbanks were most likely to report rising costs of food and housing as issues, whilst couple parents were more likely to be facing a double burden of childcare and ill-health. For 80 per cent of couple families, at least one family member had a health condition and common mental health conditions such as depression and anxiety affected 40 per cent.

Our findings draw urgent attention to the severe food insecurity and poverty experienced by families with children who are receiving help from foodbanks.

Dr Rachel Loopstra, the lead author of the SPERI report and Lecturer in Nutrition at King’s College London, said: “Our findings draw urgent attention to the severe food insecurity and poverty experienced by families with children who are receiving help from foodbanks. Low-income families with children have experienced significant reductions in welfare entitlements in recent years, and entitlements will be reduced further for low-income families given changes to Child Tax Credits and the ongoing benefit freeze in the context of rising living costs.

“If financial support is not increased for low-income families with children, it is likely more children and their parents will need to use foodbanks in the years to come. Annual measurement of food insecurity in a national survey is needed to monitor vulnerability to this serious problem among households with children.”

Emma Revie, Chief Executive of The Trussell Trust, said: “As a nation we value justice and compassion, particularly for our children. But this research shows families across Britain are locked in poverty, with income so low they are unable even to afford to put food on their children’s plates. These findings are particularly concerning when we are braced for further real-terms reductions in the very working age benefits that should be protecting these families and children from poverty and hunger in the first place.

“Our network of foodbanks will continue to ensure food and support is given to families facing hunger right now. But we are also calling on Government to unfreeze working age benefits. There should be no higher priority than ensuring all UK families can afford to put food on the table when their children are hungry.”

The Trussell Trust is asking policy-makers to ensure better support for families is in place by:

* Returning the work allowance to pre-April 2016 levels for parents would mean it would rise to:

About this brief
SPERI British Political Economy Brief No. 32, Family Hunger in Times of Austerity: Families Using Foodbanks Across Britain, draws on data from a large scale survey of households using foodbanks in The Trussell Trust network, to understand foodbank use amongst families with children in 2016/17. 598 households overall completed the survey on tablet devices and for the brief’s analysis, the number and characteristics of households living with children less than 16 years of age were quantified.

The findings examine the family demographics of people at foodbanks and the particular vulnerability of certain families to foodbank use. It was authored by Rachel Loopstra (King’s College London), Hannah Lambie-Mumford (The University of Sheffield), and Ruth Patrick (University of Liverpool).

The brief is part of a three-part series on families and hunger in the UK. More information about Brief 31, Children’s experience of food and poverty: the rise and implications of charitable breakfast clubs and holiday hunger projects in the UK by Hannah Lambie-Mumford and Lily Sims, and Brief 33, Families and Food in Hard Times: rising food poverty and the importance of children’s experiences, by Rebecca O’Connell, at http://speri.dept.shef.ac.uk/2018/03/22/child-food-insecurity-in-the-uk-three-new-speri-briefs-published-today/

About The Trussell Trust
The Trussell Trust is an anti-poverty charity that runs a network of 428 foodbanks across the UK.
It is simply not acceptable that so many people in the UK face hunger, and we won’t sit by whilst increasing numbers of people are expected to hit crisis and need a foodbank’s help. We’re committed to creating long term change, challenging the structural issues that lock people into poverty and seeing an end to the need for foodbanks.
Whilst we work towards this, we’re determined to ensure everyone referred to a foodbank in our network receives the best possible support, so we help foodbanks to offer much more than food: volunteers are supported to provide a listening ear and help resolve the underlying cause of crisis either through signposting onto relevant local charities or providing on-site immediate support, such as money advice and budget cookery courses.
Read more

Sheffield has six Nobel Prize winners among former staff and students and its alumni go on to hold positions of great responsibility and influence all over the world, making significant contributions in their chosen fields.Global research partners and clients include Boeing, Rolls-Royce, Unilever, AstraZeneca, Glaxo SmithKline, Siemens and Airbus, as well as many UK and overseas government agencies and charitable foundations.