The First Minister of Scotland Nicola Sturgeon called for a shift away from austerity and a move towards major investment in jobs and public services in a speech at the University of Sheffield last night (7 November 2016). 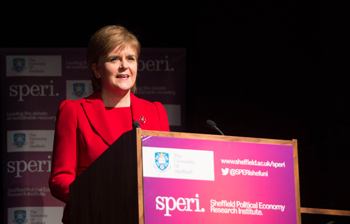 Ms Sturgeon addressed a sold-out audience of 1,200 at the Sheffield Political Economy Research Institute (SPERI) annual lecture on “Scotland and the UK: economic policy after the EU referendum”.

In a 30-minute speech, the First Minister said the UK Government must reverse its austerity policies and give people "more grounds for hope" - a factor she suggested was one of the underlying reasons for the vote to leave the EU.

“Austerity has already caused huge social harm and brought no economic benefit – it has failed, categorically and comprehensively, on its own terms.

“So the Chancellor of the Exchequer needs to change course in his Autumn Statement in a fortnight to invest in the economy and support public services, offering hope for the future rather than playing on the fears of the present.”

Setting out the need to learn the lessons of the EU referendum result and to invest in inclusive growth, Ms Sturgeon added there is a need to demonstrate that being open to free trade and free movement “isn’t just good for the economy as a whole - it benefits individuals and communities too."

She said: It creates, rather than curtails new opportunities for everyone. And it can lead to a society which is more prosperous, more inclusive, and more cohesive.”

In her address, the First Minister praised the work of the Alcohol Research Group at the University’s Sheffield School of Health and Related Research, whose study on minimum unit pricing of alcohol underpins an Act of Parliament passed by the Scottish Parliament in 2012.

She said: “That legislation has faced significant court challenges, but we may now be getting towards a position where we can implement it. If that is the case, then work done here in Sheffield will contribute to saving dozens of lives in Scotland every year.

“The Public Health School is a good example of the excellence of this University’s work.”

She added: “And so of course is this research institute. Sheffield University’s political economy research centre was launched in 1994; and SPERI itself was then established in 2012. In recent years, it has developed a strong reputation for its academic work, and its efforts to improve the public understanding of political economy. This annual lecture is one part of that very important wider mission. I am honoured to have been asked to deliver it.”

SPERI brings together leading international researchers, policy-makers, journalists and opinion formers to develop new ways of thinking about the economic and political challenges by the current combination of financial crisis, shifting economic power and environmental threat. SPERI’s goal is to shape and lead the debate on how to build a new political economy. 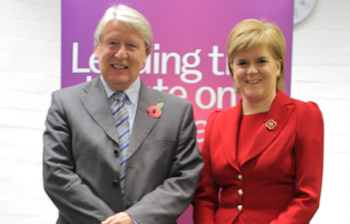 Professor Tony Payne, Co-Director of SPERI, who chaired the event, said: “Nicola Sturgeon's SPERI lecture last night was an important event for Sheffield, the University and indeed for the current political debate in the UK. Her focus on austerity as the most immediate cause of the societal divisions we are seeing in the UK and beyond offered an important insight into many current regional, domestic and indeed international economic policy debates. She also revealed a good deal about how she sees both Scotland's position in the UK and the UK's position in Europe.

“The First Minister is regarded by many judges as the most impressive politician in the UK at the moment and in her lecture and her lively and passionate response to the questions of a very large audience, she showed exactly why she has earned and deserves that reputation."

Before the lecture SPERI hosted a policy workshop on the topic of 'Scotland, the North and economic development: compatriots or competitors?' The discussion focused on the key economic challenges faced by Scotland and the North of England, the lessons policymakers in both regions can learn from each other, and how the process of leaving the EU will affect the two regions. SPERI researchers were joined for the two-hour workshop by academics, politicians and thinktank researchers from Scotland and across the North of England.