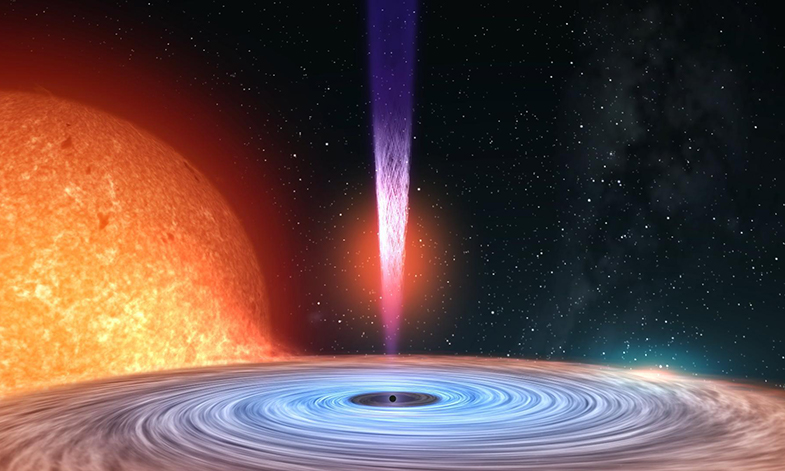 Scientists from the University of Sheffield have moved a step closer to understanding nature’s own Star Wars Death Star beams – ultra powerful jets of energy that shoot out from the vicinity of black holes.

The study, which included Dr Vik Dhillon from the University’s Department of Physics and Astronomy, has been investigating the mysterious cosmic phenomena – known as relativistic jets – by measuring how quickly they switch on and shine brightly once they are launched.

How these jets form is still a puzzle. One theory suggests that they develop within the ‘accretion disc’ – the matter sucked into the orbit of a growing black hole. Extreme gravity within the disc twists and stretches magnetic fields, squeezing hot, magnetised disc material called plasma until it erupts in the form of oppositely directed magnetic pillars along the black hole’s rotational axis.

Plasma travels along these focused jets and gains tremendous speed, shooting across vast stretches of space. At some point, the plasma begins to shine brightly, but how and where this occurs in the jet has been debated by scientists.

In the new research published in Nature Astronomy, the international team of scientists show how they used precise multi-wavelength observations of a binary system called V404 Cygni – consisting of a star and a black hole closely orbiting each other, with the black hole feeding off matter from the star that falls through the disc – to throw light on this hotly debated phenomenon.

Professor Vik Dhillon, from the University of Sheffield’s Department of Physics and Astronomy, said: “One of the best ways of observing a black hole is in a binary system, where the black hole is in orbit with a star and pulling gas from it.

“Some of this gas doesn't fall into the event horizon of the black hole, but is instead ejected in the form of a jet emanating from close to the black hole.

“Our observations have demonstrated that the rapidly varying optical light we see comes from this jet, only about 40,000km above the black hole, allowing us to test theoretical models of how black hole jets are believed to form."

V404 Cygni is located about 7,800 light years away in the constellation of Cygnus, and weighs as much as about nine of our suns put together. The research team captured the data in June 2015, when V404 Cygni was observed radiating one of the brightest ‘outbursts’ of light from a black hole ever seen – bright enough to be visible to small telescopes used by amateur astronomers, and energetic enough to tear apart an Earth-like planet if properly focused.

Using telescopes on Earth and in space observing at exactly the same time, they captured a 0.1-second delay between X-ray flares emitted from near the black hole, where the jet forms, and the appearance of visible light flashes, marking the moment when accelerated jet plasma begins to shine.

This ‘blink of an eye’ delay was calculated to represent a maximum distance of 19,000 miles (30,000 km), impossible to resolve at the distance of V404 with any current telescope.

The X-ray emission, representing the accretion disc ‘feeding’ the jet at its base, was captured from Earth orbit by NASA’s NuSTAR telescope, while the moment the jet became visible as optical light was caught by the ULTRACAM high-speed camera, mounted on the William Herschel Telescope on La Palma, in the Canary Islands.

Professor Vik Dhillon, who also co-created ULTRACAM, added: “This discovery was made possible thanks to our camera gathering 28 frames per second. It demonstrates the untapped potential of studying astrophysical phenomena at high speeds.”

The research, which was led by the University of Southampton, included the universities of Sheffield, Oxford, Cambridge and Warwick, in the UK, as well as universities in Italy, Spain, France, USA, Canada, Netherlands, Switzerland, India, Germany and the United Arab Emirates.

It was supported by the Science and Technology Facilities Council, the Spanish Ministry of Economy, Industry and Competitiveness, the Leverhulme Trust, the French National Support Agency, the Royal Society, NWO, and UK-India UKIERI-UGC Thematic Partnerships.