Astronomers based at the University of Sheffield have found evidence that stars are ripped apart by supermassive black holes 100 times more often than previously thought.

Until now, such stellar cannibalism – known as Tidal Distruption Events, or TDEs – had only been found in surveys which observed many thousands of galaxies, leading astronomers to believe they were exceptionally rare: only one event every 10,000 to 100,000 years per galaxy. 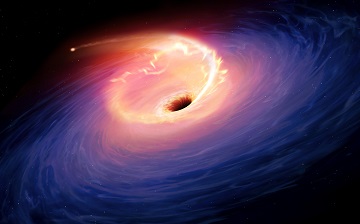 However, the pioneering study conducted by leading scientists from the University’s Department of Physics and Astronomy, recorded a star being destroyed by a supermassive black hole in a survey of just 15 galaxies – an extremely small sample size by astronomy standards.

“Each of these 15 galaxies is undergoing a ‘cosmic collision’ with a neighbouring galaxy,” said Dr James Mullaney, Lecturer in Astronomy and co-author of the study.

“Our surprising findings show that the rate of TDEs dramatically increases when galaxies collide. This is likely due to the fact that the collisions lead to large numbers of stars being formed close to the central supermassive black holes in the two galaxies as they merge together.”

The supermassive black holes that lurk in the hearts of all large galaxies can be elusive. This is because they don’t shine in a conventional sense due to their gravity being so strong that nothing can escape, not even light itself. However, the release of energy as stars are ripped apart when they move close to the black holes leads to dramatic flares. The galaxies’ nuclei can then appear as bright as all the billions of stars in a typical galaxy combined. In this way, TDEs can be used to locate otherwise dim black holes and study their strong gravity and how they accrete matter.

“Our team first observed the 15 colliding galaxies in the sample in 2005, during a previous project,” said Rob Spence, University of Sheffield PhD student and co-author of the study.

“However, when we observed the sample again in 2015, we noticed that one galaxy – F01004-2237 – appeared strikingly different. This led us to look at data from the Catalina Sky Survey, which monitors the brightness of objects in the sky over time. We found that in 2010, the brightness of F01004-2237 flared dramatically.”

The particular combination of variability and post-flare spectrum observed in F01004-2237 – which is 1.7 billion light years from Earth – was unlike any known supernova or active galactic nucleus, but characteristic of TDEs.

Clive Tadhunter, Professor of Astrophysics and leader of the study, said: “Based on our results for F01004-2237, we expect that TDE events will become common in our own Milky Way galaxy when it eventually merges with the neighbouring Andromeda galaxy in about 5 billion years.

“Looking towards the centre of the Milky Way at the time of the merger we’d see a flare approximately every 10 to 100 years. The flares would be visible to the naked eye and appear much brighter than any other star or planet in the night sky.”

The study, published today (27 February 2017) in the journal Nature: Astronomy, was supported by a grant from the UK Science and Technology Facilities Council.
The findings were based on observations made with the William Herschel Telescope, which is operated on the island of La Palma by the Isaac Newton Group in the Spanish Observatorio del Roque de los Muchachos of the Instituto de Astrofisica de Canaria. The study also used data taken with NASA/ESA Hubble Space Telescope, and the Catalina Sky Survey.

Scientists at the University of Sheffield’s Department of Physics and Astronomy are exploring the fundamental laws of the universe and developing pioneering technologies.

Students in the Department work with leading academics in the field to look beyond our planet to tackle global challenges – from climate change to meeting energy demands. This research further cements the University’s position at the forefront of Physics and Astronomy research.