Randomly distributed sticky spots which are integral to the development of stem cells by maximising adhesion and acting as internal scaffolding have been artificially recreated by experts from the University of Sheffield for the first time. 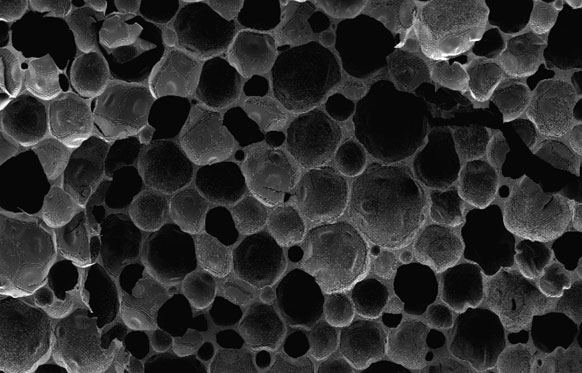 Using synthetic foam type materials to mimic the natural process – known as the extracellular matrix or ECM – scientists, from the University of Sheffield and University of California San Diego, created the random stickiness required for stem cells to properly adhere.

The findings will better inform researchers across the world of how to make their biomaterials appropriately sticky for stem cells to grow.

Previous attempts to recreate the process have managed only a uniform spread of sticky cells meaning there isn’t the maximum hindering the stem cells maturation into tissue cells.

Professor Giuseppe Battaglia of the University’s Department of Biomedical Science said: “We used two polymers, one that is sticky and one that is not, which separate from each other in solution. Just like with balsamic vinaigrette, we shook these two polymers up sufficiently to form randomly distributed nano-scopic patches of the sticky material – the balsamic vinegar –in a non-sticky material, just like the olive oil. To put it another way, these two materials phase separate within the foam to give you regions distinctly of one material or the other.”

At the appropriate ratio of sticky and non-sticky polymer, the researchers found that it is possible to tune the size and distribution of the foam’s adhesive regions: having less sticky polymer in the foam made its adhesive patches smaller and more dispersed, just like in the human body with natural ECM.

Professor Battaglia and Priyalakshmi Viswanathan, who performed most of the experimental work, added: “What was surprising to the team was that when we allowed stem cells to adhere to the foams, we found that random stickiness versus uniform stickiness was required for stem cells to properly adhere. We also found that this is likely necessary for stem cell development into mature tissue cells. In this sense, stem cells are like Goldilocks: the scaffold should not be too sticky or not sticky enough, it must be just right to maximize adhesion, and later, maturation into tissue cells.”

The data was published following a collaboration between Professor of Synthetic Biology from Sheffield Giuseppe Battaglia, and Assistant Professor of Bioengineering from San Diego Adam Engler in the Journal of the American Chemical Society and was highlighted in this week’s issue Nature.