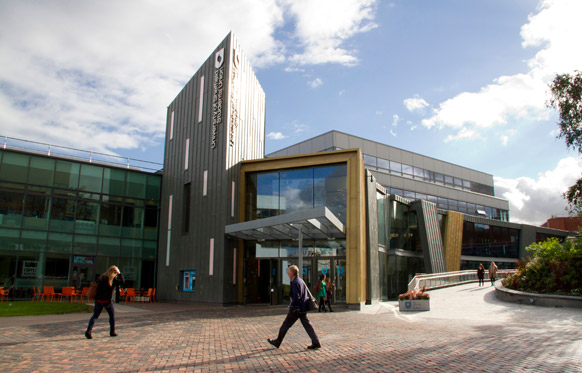 The radically revamped building, which broke new ground when it was unveiled almost 50 years ago, features state of the art facilities for student services, an amphitheatre styled space for special events within the new Octagon Piazza, as well as more social and study spaces open for longer hours.

University House, which was one of the first glass curtain walled buildings in the world when it was completed in 1963, has now been integrated with the University’s Students' Union – the number one in the UK - in one single building. 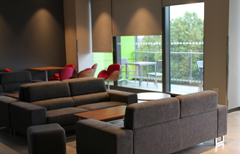 The newly revamped building forms part of the University’s commitment to offering the best facilities to students and staff and is now home to Sheffield’s newest restaurant, Inox Dine, in addition to six new cutting edge events spaces catering for up to 250 delegates.

The 100 capacity all-day casual dining restaurant will offer new top-class facilities, not only for staff and students, but also for the wider business community and restaurant goers across the city, featuring excellent city views and a contemporary British menu with international influences. The venue, which celebrates the Steel city's heritage in its design, finishing touches and name - with the word Inox used for stainless steel in metallurgy -also features a speciality egg bar for breakfast meetings and a Sheffield inspired afternoon tea,

The new Students’ Union Building also now houses additional bookable spaces for use as contemporary exhibition and business spaces and boasts improvements to the City View Cafe, as well as the venue space: Foundry, Studio and Fusion.

In addition, significant improvements have been made to pedestrian access and landscaping, and the new building features a bridge joining the Octagon building to the Students’ Union, bringing all facilities together under one roof at the heart of the campus. The work has also brought the building up-to-date with modern efficiency standards, radically reducing annual energy consumption and the building’s carbon footprint.

The Students’ Union, which employs over 900 people and offers nearly 50 sports clubs and more than 350 societies, is a major factor in attracting students to Sheffield and was last month ranked the best Students’ Union in the UK in the National Students Survey (NSS). The redevelopment of the building aims to keep it at the forefront of such facilities nationwide and complements the £5 million revamp which was carried out on the Students’ Union in 2010.

“It’s great that new students can start the term being able to enjoy an even bigger and better Students’ Union with top class facilities to suit our diverse student body."

Professor Sir Keith Burnett, Vice-Chancellor at the University of Sheffield, said: "We’re delighted that our award-winning Students’ Union, which is already the best in the country, is continuing to provide students with state-of-the-art facilities.

"The refurbishment reflects the strong partnership between the Students' Union and the University and demonstrates our commitment to providing an unrivalled student experience - something we’re really proud of."