As people across the UK celebrate the 100 year anniversary of women’s partial suffrage, a historian from the University of Sheffield is helping to carve a place in history and in public space for the women and men who fought for women’s right to vote. 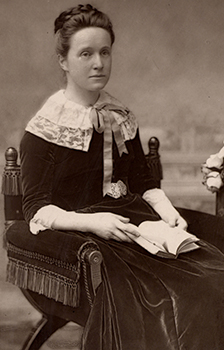 Dr Julie Gottlieb, an expert on women’s history from the University, has been working as a historical adviser to the artist commissioned to create the statue of suffragist leader Millicent Fawcett, which is set to be unveiled in London next week (Tuesday 24 April 2018).

The statue, which will be unveiled in Parliament Square as part of celebrations marking the centenary of women’s partial suffrage, honours the suffragist leader of the non-militant branch of the movement – the National Union of Women’s Suffrage Societies – as well as 59 women and men who fought for women’s suffrage.

Dr Gottlieb, who has conducted extensive and widely recognized research on women in 20th century British political history, worked with Gillian Wearing – the Turner Prize-winning artist commissioned to create the statue – advising Wearing on the campaigners to be commemorated around the statue’s plinth.

The plinth honours some well-known figures from the suffrage movement, such as suffragettes Emily Wilding Davison, Annie Kenney, and the Pankhursts, as well as those who are less well-known, for example the women and men who supported the constitutionalist wing of the movement, feminists like Eleanor Rathbone, Ellen Wilkinson, Helena Swanwick, and even women from the Conservative Party like Maud Lady Selbourne. Male supporters of women’s suffrage, such as Laurence Housman (1865-1959), the radical playwright, socialist, pacifist and founding member of the Men’s League for Women’s Suffrage, and the Rev Claude Hinscliff (1875-1964), founder of the Church League for Women’s Suffrage with his wife Gertrude are also honoured by the statue.

Dr Gottlieb, who also studies the history of race and ethnicity, said: “When I worked with Gillian Wearing on finalising the list of women and men to be honoured on the statue there was a strong feeling that the list should be as representative as possible, without distorting the reality of the demographic and geographic range of suffrage campaigners. Suffrage campaigners from Wales, Ireland, Scotland and the North of England are all represented, as are women from ethnic minorities, such as Sophia Duleep Singh (1876-1948) and Henrietta Franklin (1866-1964), education reformer and leader of Jewish League for Woman Suffrage.

“The women and men on the plinth are from a range of classes, ethnicities, religious backgrounds and also political orientations. It is often assumed that suffragists were from the left-wing of politics, but in fact liberal women dominated the suffragist organisations while there were conservative women and men who fought for women’s right to vote too.”

She added: “On the statue, Millicent is holding up a banner saying ‘Courage calls to courage everywhere’, her words following the death of suffragette Emily Wilding Davison, who threw herself in front of the King’s horse at Epsom in 1913.”

As part of the commemoration, Dr Gottlieb is also highlighting the difference between suffragettes and suffragists – something which is often confused. 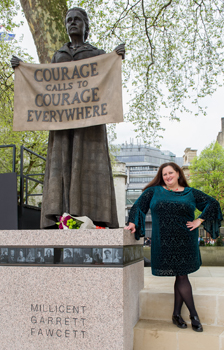 She said: “Both groups had distinct identities and followed different tactics. The suffragists were part of a longer tradition dating from the 19th century, based on peaceful protest rather than militancy. The militant acts of the suffragettes were a response to the slow progress of democratic suffragism.

“Although suffragists don’t get as much attention, we can’t ignore the less spectacular but much longer campaign. There are historians who argue that the constitutionalists were in fact the more effective of the two wings, and the credit for the vote belongs to them. But, as I say, this is a heated debate to this day.

“The suffragettes endured great suffering – violence, imprisonment, hunger strike and force feeding. We just have to be careful that their considerable sacrifices shouldn’t overshadow the breadth of the movement and the effectiveness of campaigning, petitioning, canvassing, and writing that came from the suffragists.”

Dr Gottlieb is also highlighting other misconceptions around women’s fight for suffrage as part of the centenary celebrations.

She added: “We also need to remember that there weren’t just these two organisations, that’s another misconception – there were dozens. There were suffrage organisations representing different occupations, religions, and interests, and each political party had their own movement, including the Conservatives, which you might not expect. There were dozens of occupationally-based and regionally-defined suffrage societies too.

“The acts of martyrdom which are being widely acknowledged on the part of the suffragettes shouldn’t be underplayed because this is what makes this anniversary so poignant, so rich and so inspiring. On the other hand, that should not come at the expense of acknowledging how constitutional democratic practices can achieve the same goal. Nor should that deradicalise the suffragists – their fight for universal suffrage was already radical enough, they were just using different means. Fawcett was not just a stiff, Victorian figure - she was a real radical, who had greater faith in the system.”

Dr Gottlieb’s research on women’s suffrage, 20th century British political history and the history of race and ethnicity is being fed into learning and teaching modules for history students at the University of Sheffield.

The University’s Department of History is one of the largest and most active centres for historical research in the UK with award-winning, research-led teaching.

Study History at the University of Sheffield