New research by academics at the University of Sheffield has solved a long-standing mystery surrounding the evolution of galaxies, deepening our understanding of the future of the Milky Way.

The supermassive black holes in the cores of some galaxies drive massive outflows of molecular hydrogen gas. As a result, most of the cold gas is expelled from the galaxies. Since cold gas is required to form new stars, this directly affects the galaxies’ evolution. 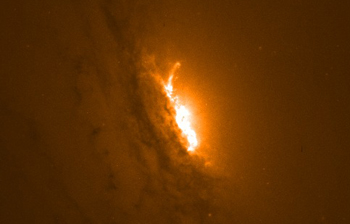 The outflows are now a key ingredient in theoretical models of the evolution of galaxies, but it has long been a mystery as to how they are accelerated.

A study led by researchers in the University's Department of Physics and Astronomy, with partners from the Netherlands Institute of Radio Astronomy and the Center for Astrophysics, Harvard, provides the first direct evidence that the molecular outflows are accelerated by energetic jets of electrons that are moving at close to the speed of light. Such jets are propelled by the central supermassive black holes.

Using the Very Large Telescope of the European Southern Observatory in Chile to observe the nearby galaxy IC5063, researchers found that the molecular hydrogen gas is moving at extraordinary speeds – 1 million kilometers per hour – at the locations in the galaxy where its jets are impacting regions of dense gas.

These findings help us further understand the eventual fate of our own galaxy, the Milky Way, which will collide with neighbouring galaxy Andromeda in about 5 billion years. As a result of this collision, gas will become concentrated at the centre of the system, fuelling its supermassive black hole, and potentially leading to the formation of jets that will then eject the remaining gas from the galaxy – just as we already observe in IC5063.

Professor Clive Tadhunter, from the University's Department of Physics and Astronomy, said: "Much of the gas in the outflows is in the form of molecular hydrogen, which is fragile in the sense that it is destroyed at relatively low energies. It is extraordinary that the molecular gas can survive being accelerated by jets of electrons moving at close to the speed of light."

The results of the study have been published in the journal Nature.