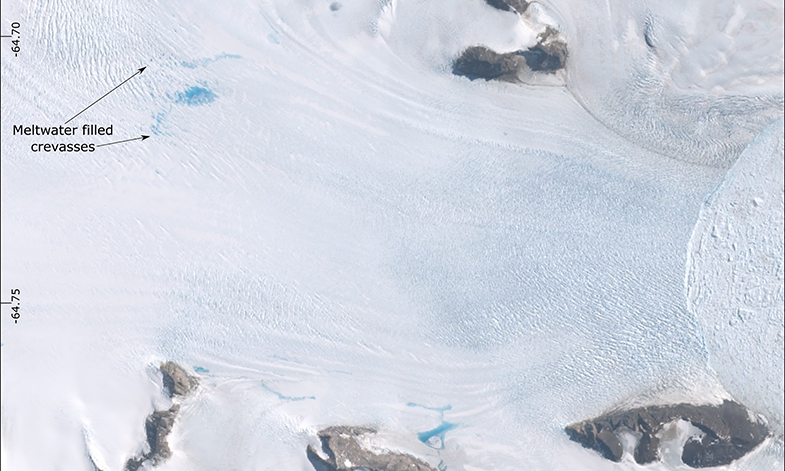 Surface meltwater draining through the ice and beneath Antarctic glaciers is causing sudden and rapid accelerations in their flow towards the sea, according to new research.

This is the first time scientists have found that melting on the surface impacts the flow of glaciers in Antarctica.

Using imagery and data from satellites alongside regional climate modelling, scientists at the University of Sheffield have found that meltwater is causing some glaciers to move at speeds 100 per cent faster than average (up to 400m per year) for a period of several days multiple times per year.

Glaciers move downhill due to gravity via the internal deformation of ice, and basal sliding – where they slide over the ground beneath them, lubricated by liquid water.

The new research, published today in Nature Communications, shows that accelerations in Antarctic Peninsula glaciers’ movements coincide with spikes in snowmelt. This association occurs because surface meltwater penetrates to the ice bed and lubricates glacier flow.

The scientists expect that as temperatures continue to rise in the Antarctic, surface melting will occur more frequently and across a wider area, making it an important factor in determining the speed at which glaciers move towards the sea.

Ultimately, they predict that glaciers on the Antarctic Peninsula will behave like those in present-day Greenland and Alaska, where meltwater controls the size and timing of variations in glacier flow across seasons and years.

The effects of such a major shift in Antarctic glacier melt on ice flow has not yet been incorporated into the models used to predict the future mass balance of the Antarctic Ice Sheet and its contribution to sea level rise.

Dr Jeremy Ely, Independent Research Fellow at the University of Sheffield’s Department of Geography and author of the study, said: "Our research shows for the first time that surface meltwater is getting beneath glaciers in the Antarctic Peninsula – causing short bursts of sliding towards the sea 100 per cent faster than normal.

"As atmospheric temperatures continue to rise, we expect to see more surface meltwater than ever, so such behaviour may become more common in Antarctica.

"It’s crucial that this factor is considered in models of future sea level rise, so we can prepare for a world with fewer and smaller glaciers."

Pete Tuckett, who made the discovery while studying for his Masters in Polar and Alpine Change at the University of Sheffield, said: "The direct link between surface melting and glacier flow rates has been well documented in other regions of the world, but this is the first time we have seen this coupling anywhere in Antarctica.

"Given that atmospheric temperatures, and hence surface melt rates, in Antarctica are predicted to increase, this discovery could have significant implications for future rates of sea level rise."