Swimming devices could deliver drugs inside the body

A new method of guiding microscopic swimming devices has the potential to deliver drugs to a targeted location inside the body, according to new research published in Nature Communications. 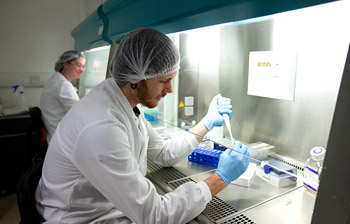 Engineers at the University of Sheffield have discovered that tiny spherical bead-like devices can be guided by physical structures while swimming inside fluids. This opens up a wealth of future possibilities, such as using structures in the body to guide drug delivery, or cracks in rocks to direct environmental clean-up and exploration.

These devices, which are a similar size to cells and bacteria - around a hundredth of the average diameter of a strand of human hair - could be used to deliver drugs to a specific location inside the body or outside of the body to diagnose diseases in blood samples. Examples include finding proteins indicating cardiac problems or looking for circulating tumour cells that can indicate the spread of cancer.

When working with devices on a micron scale, it’s very challenging to produce motion from moving parts due to the properties of the fluid - it’s similar to humans trying to run through treacle. Previous research has focused on using external magnetic fields to guide the devices, but this requires constant observation so that the device can be guided manually.

The research conducted at Sheffield uses a new method, giving the devices a catalytic coating on one side, which creates a chemical reaction when fuel molecules are added, causing the device to move automatically on a pre-determined route, using natural structures as a guide.

Dr Stephen Ebbens, Department of Chemical and Biological Engineering at Sheffield, said: “When you’re dealing with objects on such a small scale, we found that although our method of moving the devices using a coating and chemical reaction worked very effectively, it was difficult to control its direction, due to other molecules in the fluid jostling it.

“We’ve been working on ways to overcome this and control the movement of the devices along a path using physical structures to direct them.

“We are now working on applications for using these devices in the body, in the shorter term focusing on using them for medical diagnosis.”

In addition to medical applications, these devices could be used in other fields, such as to locate indicators of contamination in environmental samples or to deliver neutralising chemicals to areas affected by oil spills, by using crevices in rocks as the structural guide.

The UK research team were funded by the EPSRC.