New archaeological ‘high definition’ sourcing sharpens understanding of the past 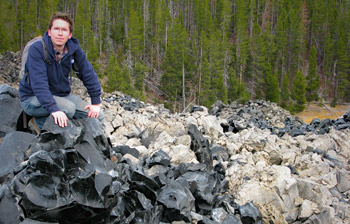 A new method of sourcing the origins of artefacts in high definition is set to improve our understanding of the past.

Dr Ellery Frahm at the University of Sheffield developed the new technology to better study Mesopotamian obsidian tools unearthed in Syria, where cultural heritage is threatened by the ongoing conflict.

The research brings five decades of research full circle and presents a significant advance in the field. While at the University of Sheffield from 1965 – 1972, Professor Lord Colin Renfrew developed a technique that matched stone tools made of obsidian, naturally occurring glass, to their volcanic origins based on their chemical fingerprints. Considered one of the greatest successes in scientific archaeology, matching artefacts to specific volcanoes was a significant leap forward in understanding trade, contact, and cultural change in the ancient world.

Nearly 50 years later, Dr Frahm’s work is the next major advance in obsidian sourcing. Previously it was only possible to match an artefact to a particular volcano or lava flow, sometimes covering dozens of chemically uniform square kilometres. Frahm’s new approach builds on traditional methods with additional magnetic analyses. The magnetic properties of obsidian vary on the scale of meters, not kilometres, enabling researchers to match an artefact to a particular quarry at the volcano. The result is much greater specificity of an artefact’s origin, enabling human behaviours in the past to be reconstructed with greater spatial resolution than previously possible.

“Sourcing artefacts in this way gives us a sharper picture of the past,” explained Frahm. “We have already used this approach to show how obsidian was collected from certain quarries at volcanoes and how ancient quarrying locations change over time. This approach provides a deeper insight into our understanding of past human behaviour and will hopefully enhance research into how different groups managed natural resources linked to their economies.”

Indeed, one of the most important aspects of the study for Dr Frahm and his collaborator, Dr Joshua Feinberg at the University of Minnesota, was the simplicity of the approach and how widely applicable it will be. “Our magnetic tests were chosen in part for their simplicity so that most rock magnetism laboratories could take the necessary measurements and apply this new approach worldwide. We did not want to develop a technique that could only be done in one or two laboratories in the world. It was important the approach be accessible, making it as ‘open source’ as possible.”

Development of this approach partly depended on the sheer quantities of specimens and artefacts studied, “This study involved more magnetic measurements of obsidian than all previously published studies combined,” explained Frahm. “The resulting picture revealed how to identify quarries of particular importance to Mesopotamian peoples, and it helps us to piece together their cultural significance.”

The cultural significance of artefacts to Syria’s heritage, which is under threat due to the current conflict, is an important part of Frahm’s research. “During my fieldwork in Syria, I identified some spectacular artefacts that should be curated and displayed to the Syrian public at the Deir ez-Zor archaeological museum.

“Unfortunately, Deir ez-Zor has been a centre of fighting since summer 2011. The last time I had an update, the museum had become a stronghold for the Syrian military, even with snipers on the roof, and it appears that when they pulled out last fall, the museum was essentially trashed. This has a doubly damaging effect on the country. Not only do many Syrians see archaeological sites and artefacts as part of their heritage, but also archaeological excavations put money into the local economy and employ local workers, helping people in rural villages make ends meet. Protecting Syrian heritage throughout this terrible conflict is an issue that needs attention from people who are in a position to help.”

Dr Frahm's paper in the Journal of Archaeological Science

Archaeology at the University of Sheffield
Department of Archaeology