An archaeologist from the University of Sheffield has revealed the origin and trading routes of razor-sharp stone tools 4,200 years ago in Syria. 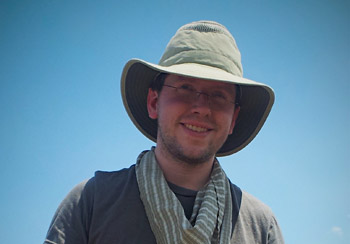 Ancient sites and cultural heritage are under threat in Syria due to the current conflict. An interdisciplinary research team hopes this new discovery, which has major implications for understanding the world’s first empire, will help to highlight the importance of protecting Syria’s heritage.

Obsidian, naturally occurring volcanic glass, is smooth, hard, and far sharper than a surgical scalpel when fractured, making it a highly desired raw material for crafting stone tools for most of human history. In fact, obsidian tools continued to be used throughout the ancient Middle East for millennia beyond the introduction of metals, and obsidian blades are still used today as scalpels in specialised medical procedures.

In an interdisciplinary collaboration, researchers from social and earth sciences studied obsidian tools excavated from the archaeological site of Tell Mozan, located in Syria near the borders with Turkey and Iraq. Using novel methods and technologies, the team successfully uncovered the hitherto unknown origins and movements of the coveted raw material during the Bronze Age, more than four millennia ago.

Most of the obsidian at Tell Mozan (and surrounding archaeological sites) originated from volcanoes 200km away in what is now eastern Turkey, as expected from models of ancient trade developed by archaeologists over the last five decades. However, the team discovered a set of exotic obsidian artefacts originating from a volcano in central Turkey, three times farther away. Just as important as their distant origin is where the artefacts were found: a royal palace courtyard. The artefacts were left there during the height of the world’s first empire, the Akkadian Empire, which invaded Syria in the Bronze Age. The find has exciting implications for understanding links between resources and empires in the Middle East.

Dr Ellery Frahm, Marie Curie Experienced Research Fellow at the University of Sheffield’s Department of Archaeology, led the research. He said: “This is a rare, if not unique, discovery in Northern Mesopotamia that enables new insights into changing Bronze-Age economics and geopolitics. We can identify where an obsidian artefact originated because each volcanic source has a distinctive ‘fingerprint’. This is why obsidian sourcing is a powerful means of reconstructing past trade routes, social boundaries, and other information that allows us to engage in major social science debates.”

Not only did Frahm and his collaborators identify the particular volcano where the artefacts originated, they were able to pinpoint the exact flank of the volcano where the obsidian was collected and determine that the raw material was gathered from two different spots on its slopes. Such specificity was possible using a combination of scientific techniques, including a portable X-ray analyser that can be brought to archaeological sites and instruments that measure weak magnetic signals within rocks.

The earliest techniques of matching Middle East obsidian artefacts to their volcanic origins were developed partly at the University of Sheffield by famed archaeologist Colin Renfrew, Lecturer in the Department of Prehistory and Archaeology from 1965 to 1972. Frahm said: “Decades later, we are continuing to refine their original techniques. New technologies allow us to try new approaches. Powerful analytical tools can now be brought with us to sites, and sensitive magnetic instruments enable us to distinguish quarries, a level of specificity not previously possible. Our findings at Tell Mozan reveal that, even in the Middle East, the birthplace of obsidian sourcing, there are still surprises.” 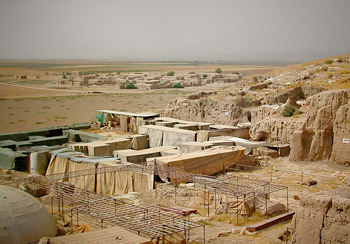 Frahm points out: “Studying the use and origin of obsidian reveals some compelling parallels with modern-day Middle East and has resonance with issues that the region faces today. For example, we think that invading powers, intent on controlling access to valuable resources, would have faced resistance to occupation from small states across the region ruled by peoples who were ethnic minorities elsewhere in the Middle East.

“A mountain insurgency could have resulted in a blockade of natural resources, and the colonisers may have been forced to instead seek resources from more distant sources and forge alliances with other regional powers to raise their status. This was 4,200 years ago during the Bronze Age – the parallels to the recent history of the area are extraordinary.”

Dr Frahm is also interested in the relationship between humanitarian and archaeological work in the region. He added: “I went to Syria as an American after the US had called Syria part of the ‘Axis of Evil’, and I only had positive experiences there. The degree of hospitality that I encountered was extraordinary. Perfect strangers took me into their home during my journey from Damascus to the site, which involved a nine-hour bus ride through the Syrian Desert. I was welcomed, fed, offered a shower and change of clothes, introduced to family and friends, and shown around town. Family members argued over whose house had the better accommodations for me to spend the night.

“The current situation in Syria is tragic and precarious. Because of both professional and personal interests, I follow developments in Syria closely. It can be so overwhelming and heartbreaking that I have to take a break from it, which, unlike the people who are living through the fighting, I have the luxury of doing. Whatever the future holds, there will be a lot of work to do there, both humanitarian and archaeological, and I'm very much interested in the interfaces between them. How can archaeology perhaps help Syria recover from this?”

His next study with Syrian obsidian artefacts explores what happened to trade and social networks when Bronze-Age cities were abandoned in the wake of a regional government collapse and increasing droughts due to climate changes.

Dr. Frahm’s research is newly published online in the Journal of Archaeological Science. The study was funded in part by the Marie Curie Network “New Archaeological Research Network for Integrating Approaches to Ancient Material Studies” (NARNIA), which focuses on archaeological science in the Eastern Mediterranean region.

The research paper is published now at:
Journal of Archaeological Science

To find out more about the Department of Archaeology at the University of Sheffield, visit:
Archaeology

With nearly 25,000 students from 125 countries, the University of Sheffield is one of the UK´s leading and largest universities. A member of the Russell Group, it has a reputation for world-class teaching and research excellence across a wide range of disciplines.