Glow in the dark tampons identify sewage pollution in rivers

Tampons may not be an obvious scientific tool, but engineers from the University of Sheffield have been using them to identify where waste water from baths, washing machines, sinks and showers is polluting our rivers and streams. 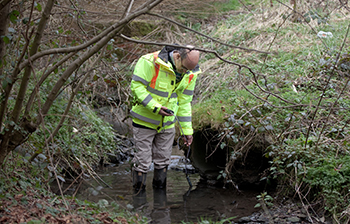 The natural, untreated cotton in tampons readily absorbs chemicals commonly used in toilet paper, laundry detergents and shampoos. These chemicals – known as optical brighteners –are used to enhance whites and brighten colours, and show up under ultra-violet (UV) light, a phenomenon often seen in glowing t-shirts under certain lighting in bars and clubs.

Using a mixture of laboratory tests and field trials, the team from the University of Sheffield’s Faculty of Engineering have shown that when tampons are suspended in water contaminated by even very small amounts of detergents or sewage, they will pick up optical brighteners and glow under UV light. The findings are published today (31 March 2015) in the Water and Environment Journal.

Professor David Lerner who led the study working with colleague Dr Dave Chandler, explained: "More than a million homes have their waste water incorrectly connected into the surface water network, which means their sewage is being discharged into a river, rather than going to a treatment plant. Unfortunately, it’s very difficult to detect where this is happening, as the discharge is intermittent, can’t always be seen with the naked eye and existing tests are complex and expensive.

"The main difficulty with detecting sewage pollution by searching for optical brighteners is finding cotton that does not already contain these chemicals. That’s why tampons, being explicitly untreated, provide such a neat solution. Our new method may be unconventional – but it’s cheap and it works."

The study, funded through the Engineering and Physical Sciences Research Council (EPSRC), used laboratory trials to determine how much detergent would need to be in the water to be picked up by the tampon test. When a tampon was dipped for just five seconds into a solution containing 0.01ml of detergent per litre of water – over 300 times more dilute than would be expected in a surface water pipe – the optical brighteners could be identified immediately and continued to be visible for the next 30 days.

The technique was then trialled in the field by suspending tampons for three days in sixteen surface water outlets running into streams and rivers in Sheffield and then testing the tampons under UV light. Nine of the tampons glowed, confirming the presence of optical brighteners – and therefore sewage pollution.

With the help of Yorkshire Water, the team followed the pipe network back from four of the nine polluted outlets they’d identified, dipping a tampon in at each manhole to see where the sewage was entering the system. They were able to successfully isolate the sections of each network where the sewage originated, narrowing down the households which would need to be inspected in more detail. A visual inspection in one area immediately revealed a house where both a sink and soil stack were connected to the wrong sewer.

"Often the only way to be sure a house is misconnected is through a dye test – putting dye down a sink or toilet and seeing where the coloured water appears in the sewer," says Professor Lerner. "It’s clearly impractical for water companies to do this for all the households they supply, but by working back from where pollution is identified and narrowing it down to a particular section of the network, the final step of identifying the source then becomes feasible."

Pollutants found in domestic waste water change the bacterial and invertebrate life in rivers, encouraging pollutant tolerant species and leading to the build-up of ‘sewage fungus’, which is visible as a grey lining to the river bed. Waste water discharges can also carry pathogens such as norovirus.

Most misconnected households are unaware they are discharging their waste water into the wrong system and – once it has been identified – immediately rectify the problem. Local authorities do have the power to complete the work and charge it back to the householder, but in practice, this power is rarely used.

Now that Professor Lerner has proved his method works in practice in the field, he hopes to trial it at a larger scale to identify all the sources of sewage pollution on the Bradford Beck, the river which runs through the city of Bradford.

The Faculty of Engineering at the University of Sheffield is one of the biggest in the UK. With seven departments and two interdisciplinary programmes covering all the engineering disciplines, 4,300 students, 950 staff and £50M annual research-related income from government, industry and charity, it is one of the best institutions in the world to study or do research in engineering.

The Faculty has a long tradition of working with industry including Rolls-Royce, Network Rail and Siemens. Its industrial successes are exemplified by the award-winning Advanced Manufacturing Research Centre (AMRC), the £25 million Nuclear Advanced Manufacturing Research Centre (NAMRC) and – jointly with Boeing – the new £43M Factory 2050, the UK’s first fully reconfigurable digital factory.

To find out more, visit: Engineering in Sheffield