A historic tapestry, which has been held at the University of Sheffield for over 50 years, is set to be donated to its original owners at the Château de Versainville, after the University helped track its origins. 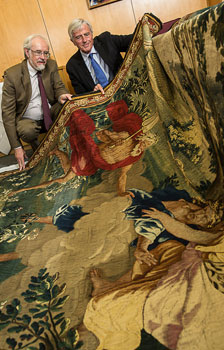 The University recently discovered that the Louis XIV tapestry had been looted from the Château during the Nazi occupation of France, and worked to return the tapestry to its rightful home in the Château with the assistance of the Art Loss Register.

The tapestry, which is dated to around 1720 and shows a scene from Ovid's Metamorphoses, had been in the possession of the University since its purchase on the open market in London in 1959.

The University recently contacted the Chateau whereupon it was discovered that the tapestry had been looted from the Château by Nazi soldiers during the Second World War, at a time when Comte Bernard de la Rochefoucauld, and his wife were both imprisoned in concentration camps. Comte Bernard de la Rochefoucauld had been an active member of the French Resistance prior to his arrest in Paris in 1943.

The Comte sadly died on 4 June 1944 as a result of his treatment at the Flossenburg concentration camp, though his wife survived the war.

The Château de Versainville, which can be found in Normandy, has undergone significant renovation during recent years as Comte Jacques de la Rochefoucauld, the descendant of Comte Bernard's brother, seeks to restore it to its former glory, and return the Château to its place in the cultural heritage of its region.

The University of Sheffield is delighted to be able to assist in securing this goal, and the tapestry will now be returned to the Château, where it will be exhibited with a plaque marking its return. Two other tapestries that were taken at the same time are still missing.

In response to the donation of the tapestry, Comte Jacques de la Rochefoucauld commented that: "I am delighted by this news and touched by the generosity of the University of Sheffield in making so kind a gesture. The example that the University has set is one which I hope others will follow in due course, and demonstrates their respect for those who have suffered in the past from the ravages of war. In the year marking the 70th anniversary of the death of Comte Bernard de la Rochefoucauld this donation brings us great happiness."

Lynne Fox, Heritage Officer at the University of Sheffied, stated that: "We are delighted to see the tapestry returned to its rightful home at the Château de Versainville and are very pleased to have been able to assist in this process. We were as surprised as anyone to discover the history of the tapestry but have been working extremely hard to ensure it is returned to the Château where it can be appreciated in its original home."

James Ratcliffe, Director of Recoveries at the Art Loss Register, said that: “It has been a pleasure to assist in the restoration of this tapestry to its rightful home. We are extremely grateful to the University of Sheffield for their assistance and generosity. It is always satisfying to bring restitution cases to a conclusion and we hope to locate and recover the remaining two missing tapestries in due course through our work.”

The Art Loss Register is the world’s largest privately held database of lost and stolen art. It was established in 1991.
The Art Loss Register provides a due diligence service to auction houses, dealers, individuals and public organisations. It also works to recover stolen and looted art.
There are over 400,000 items on the database, with tens of thousands added every year by the victims of crime, insurers, museums and law enforcement agencies. The database is searched over 400,000 times a year.
The Art Loss Register is based in London, but has international coverage and works closely with law enforcement agencies worldwide on the recovery of stolen items.
Since its inception, the Art Loss Register has been responsible for the recovery of lost and stolen art to a value of in excess of £200 million.