A bird expert at the University of Sheffield has spent 40 years studying seabirds on an island off the UK in one of the longest running investigations of its kind. 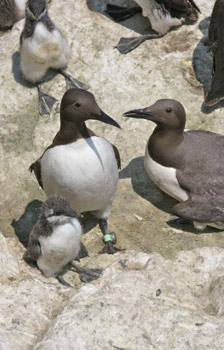 Professor Tim Birkhead, of the University’s Department of Animal and Plant Sciences, first visited Skomer Island - situated off the cost of west Wales - in 1972 and since then he has returned every summer, gaining invaluable information about guillemots.

He will visit the island again on June 21 2012 for 10 days, marking his 40th breeding season studying the guillemots, conducting an annual census and ringing the birds to see how old they are when they start to breed and how long they live.

Professor Birkhead said: “It has been an invaluable investigation, for example it is clear that climate change has had a huge effect on the guillemots as they now breed two weeks earlier than they did in the 1970s. We also know a huge amount more about guillemot biology than we did 40 years ago, and we can use changes in guillemot numbers to tell us what is happening in the seas surrounding the island.

“Long term studies like this are few and far between but remain vital for understanding changes taking place in the environment. It’s been a constant challenge both to secure funding and to carry out the work itself as the birds breed on the sea battered cliffs of a remote island.” 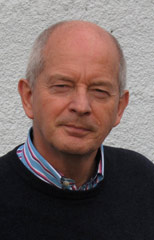 Home to about half a million seabirds, including the guillemots, razorbills and puffins, uninhabited Skomer Island is a natural nature reserve, specially protected and a site of scientific importance.

Technological advances throughout the four decades have enabled Professor Birkhead to gain even more information about the birds.

He added: “Using new tracking technologies, like GPS and geolocators, we now have a very complete picture of where guillemots go to forage. During the breeding season they forage within about 60 km of Skomer in the south Irish Sea, but in winter they travel huge distances moving between the Bay of Biscay and the far north of Scotland.

“We also know from guillemots research elsewhere around the UK coast that Skomer is extremely fortunate to be enjoying an increasing population. At other colonies the lack of fish has caused massive breeding failures, reduced survival and decreasing populations.”

By marking birds individually with colour rings Professor Birkhead was able to measure their breeding success, see how old they are when they first start to breed and see how long the birds live.

Adult guillemots have an annual survival rate of 95 per cent and equivalent of an average life span of 25 years. On average about 80 per cent of guillemot pairs successfully rear a chick to fledging, and of these around half survive to breeding age, which is seven years old. This high survival of immature birds more than off-sets the natural mortality of the adult birds, so the population has increased.

The Department of Animal and Plant Sciences