Children as young as two are capable of being creative thinkers, according to new research. 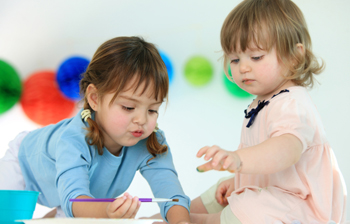 Their findings showed that as early as 24 months old, toddlers have the ability to look for new ideas.

In the study, children were given a colourful box with a hole, stairs, ledges and strings, along with novel objects to play with. The toddlers were encouraged to play with the box, with no prior demonstration, and divergent thinking, a form of creativity which involves generating ideas, was measured through the number of actions they carried out with the box and objects.

Toddlers as young as 24 months old were shown to be capable of thinking of creative and original ways of playing with the box and the objects – which included a feather, egg holder and spatula – all of which they had never seen before.

Previous divergent thinking tests have been speaking based, only allowing scientists to study children from the age of three onwards. The Unusual Box test by the University of Sheffield and Stirling is thought to be the first capable of measuring divergent thinking in younger children.

Dr Elena Hoicka, from the University of Sheffield’s Department of Psychology, said: "This research allows us to gain insight into the early emergence of divergent thinking which is crucial for understanding how creativity originates.

"We are now collecting more data with infants as young as 10 months to further examine how young we can use the test."

Dr Simone Bijvoet-van den Berg, also from the University of Sheffield’s Department of Psychology, added: "In future, this research will be useful to determine which factors contribute to the early development of creativity, such as memory or social interaction."

For a full copy of the research paper please contact the press office.