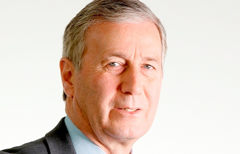 The University of Sheffield’s Pro-Chancellor Tony Pedder has been awarded an Officer of the Most Excellent Order of the British Empire (OBE) in the 2013 Queen’s Birthday Honours List. The OBE recognises Tony’s many years of commitment and outstanding service to the industry and public service, including higher education and health.

Tony Pedder has served as a Member of the University’s governing body – the University Council – since 2005, and he will take on the role of Chair from August this year.

He is also Chair of the Board of the University of Sheffield’s Advanced Manufacturing Research Centre (AMRC) and is a passionate supporter of the University’s work in partnership with local and international business. 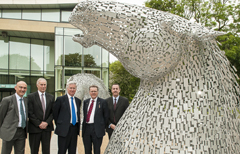 Congratulating Tony on this honour, University Vice-Chancellor Professor Sir Keith Burnett, said: "We are truly delighted that Tony Pedder's outstanding commitment to industry and public service has been recognised in this way.

"As a member of our governing body, Tony has made a vital contribution to the success of the University of Sheffield, and we are grateful to benefit from his leadership as we shape our future."

He continued: "As Chair of the Board of the Advanced Manufacturing Research Centre, Tony has also contributed his extensive experience as an industrialist and a deep commitment to the value of partnerships with local and international business as a driver of economic growth. Without any doubt, Tony's vision and dedication to the success of Sheffield are powerful assets to our city."

Commenting on the OBE, Tony said: "Receiving this honour is a source of immense pride for me. I am glad to have played my part in the life of this city, and I continue to see tremendous opportunities for the future as we work together to create opportunities and skills, economic growth and a better quality of life for the people of Sheffield."

Tony carries out a number of other important roles in Sheffield. He is Chair of Sheffield Forgemasters International Ltd, and also chairs the Sheffield Teaching Hospitals, the largest NHS Foundation Trust in the country with consistently high performance ratings for patient satisfaction and clinical care.

Tony also carries out extensive voluntary work. He is the Chairman of Whirlow Hall Farm Trust, a charity which gives children in Sheffield the educational experience of a 130-acre working farm. He is a Trustee at Sheffield Theatres, Deputy Lieutenant for South Yorkshire and Senior Warden of the Cutlers’ Company.