A new ‘toolkit’ to repair damaged DNA that can lead to ageing, cancer and motor neurone disease (MND) has been discovered by scientists at the Universities of Sheffield and Oxford. 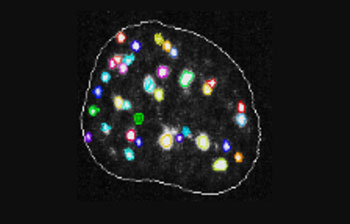 Published in Nature Communications, the research shows that a protein called TEX264, together with other enzymes, is able to recognise and ‘eat’ toxic proteins that can stick to DNA and cause it to become damaged. An accumulation of broken, damaged DNA can cause cellular ageing, cancer and neurological diseases such as MND.

Until now, ways of repairing this sort of DNA damage have been poorly understood, but scientists hope to exploit this novel repair toolkit of proteins to protect us from ageing, cancer and neurological disease.

The findings could also have implications for chemotherapy, which deliberately causes breaks in DNA when trying to kill cancerous cells. Scientists believe targeting the TEX264 protein may offer a new way to treat cancer.

Professor Sherif El-Khamisy, Co-Founder and Deputy Director of the Healthy Lifespan Institute at the University of Sheffield and a professor from the Department of Molecular Biology and Biotechnology and the Neuroscience Institute at the University of Sheffield, who co-led the research said: “Failure to fix DNA breaks in our genome can impact our ability to enjoy a healthy life at an old age, as well as leave us vulnerable to neurological diseases like motor neurone disease (MND).

“We hope that by understanding how our cells fix DNA breaks, we can help meet some of these challenges, as well as explore new ways of treating cancer in the future.”

Professor Kristijan Ramadan from the University of Oxford, who co-led the research, said: “Our finding of TEX264, a protein that forms the specialised machinery to digest toxic proteins from our DNA, significantly changes the current understanding of how cells repair the genome and so protect us from accelerated ageing, cancer and neurodegeneration. I believe this discovery has a great potential for cancer therapy in the future and we are already pursuing our research in this direction.”

Professor Ramadan added: “I am very proud of my research team who initially discovered the involvement of TEX264 in DNA repair.”

Oxford’s research was supported by funding bodies, including the Medical Research Council. Backing was also received from the Oxford Institute for Radiation Oncology and Department of Oncology.

Professor El-Khamisy’s lab is funded by the Wellcome Trust and the Lister Institute of Preventative Medicine.

The work forms part of the research taking place at the University of Sheffield’s Healthy Lifespan Institute and the Neuroscience Institute.

The Healthy Lifespan Institute brings together 120 world-class researchers from a wide range of disciplines with the aim of slowing down the ageing process and tackling the global epidemic of multi-morbidity – the presence of two or more chronic conditions – in a bid to help everyone live healthier, independent lives for longer and reduce the cost of care.

The Neuroscience Institute aims to translate scientific discoveries from the lab into pioneering treatments that will benefit patients living with neurodegenerative disorders.

The next step of the research will be to test if the behaviour and properties of protein TEX264 is altered in ageing and in neurological disorders such as MND.