Tropical cyclones in the Philippines are becoming more extreme and causing greater amounts of devastation, a new study has shown.

Geographers from the University of Sheffield have analysed annual data over the period from 1951 to 2013 and saw a slightly decreasing trend in the number of smaller cyclones (above 118 kilometres per hour) that hit land in the Philippines, particularly in the last two decades. 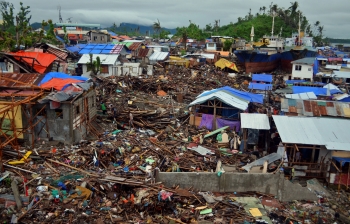 More hazardous tropical cyclones (above 150 kilometres per hour) were shown to be on the increase in recent years, with the northern island of Luzon frequently affected by these weather events and associated rainfall.

Previous research has suggested that the increase in the number of intense tropical cyclones could be due to rising sea-surface temperatures since the 1970s as a result of climate change. However it is too early to draw conclusions that will influence tropical cyclone projections, so this remains an active part of research on extreme climate events.

Monica Ortiz from the Department of Geography and Scholar in the Grantham Centre for Sustainable Futures said: “Growing up in the Philippines myself, I understand the catastrophic loss of life and damage to property that extreme weather can cause. By analysing this data from the past up to the present, we can better adapt to further climate change and prepare for future disasters.”

According to the United Nations University (UNU) World Risk Report 2014, the Philippines is one of the most at-risk nations to dangers such as tropical cyclones, monsoon rains, earthquakes and tsunamis. Many large communities live in typhoon-prone regions and low-lying coastal zones. At least 6,300 people died in the Philippines in November 2013 as a result of Typhoon Haiyan, one of the strongest tropical cyclones ever recorded.

Researchers plan to use this analysis, published in the International Journal of Climatology, to help the country better adapt and become more resilient to extreme weather events and the challenges of climate change.

Monica is currently working towards her PhD with the University of Sheffield's Grantham Centre for Sustainable Futures. As a Grantham Scholar, she is part of an innovative training programme to equip a new generation of sustainability researchers with the skills to become advocates.

Professor Colin Osborne, Associate Director of the Grantham Centre, said: "Monica and her colleagues have helped to show the devastating impact that climate change is having on communities around the world. This study is further evidence of the need to take action on climate change and develop new ways for societies to live sustainably."

The project is a collaboration between researchers at the University of Sheffield, the national meteorological agency of the Philippines (PAGASA), the Oscar Lopez Centre for Climate Change Adaptation and Disaster Risk Management (OML Centre).

With almost 27,000 of the brightest students from over 140 countries, learning alongside over 1,200 of the best academics from across the globe, the University of Sheffield is one of the world’s leading universities.
A member of the UK’s prestigious Russell Group of leading research-led institutions, Sheffield offers world-class teaching and research excellence across a wide range of disciplines.
Unified by the power of discovery and understanding, staff and students at the university are committed to finding new ways to transform the world we live in.
In 2014 it was voted number one university in the UK for Student Satisfaction by Times Higher Education and in the last decade has won four Queen’s Anniversary Prizes in recognition of the outstanding contribution to the United Kingdom’s intellectual, economic, cultural and social life.
Sheffield has five Nobel Prize winners among former staff and students and its alumni go on to hold positions of great responsibility and influence all over the world, making significant contributions in their chosen fields.
Global research partners and clients include Boeing, Rolls-Royce, Unilever, AstraZeneca, Glaxo SmithKline, Siemens and Airbus, as well as many UK and overseas government agencies and charitable foundations.

The Grantham Centre for Sustainable Futures

An ambitious and innovative collaboration between the University of Sheffield and the Grantham Foundation for the Protection of the Environment. Our sustainability research creates knowledge and connects it to policy debates on how to build a fairer world and save natural resources for future generations.