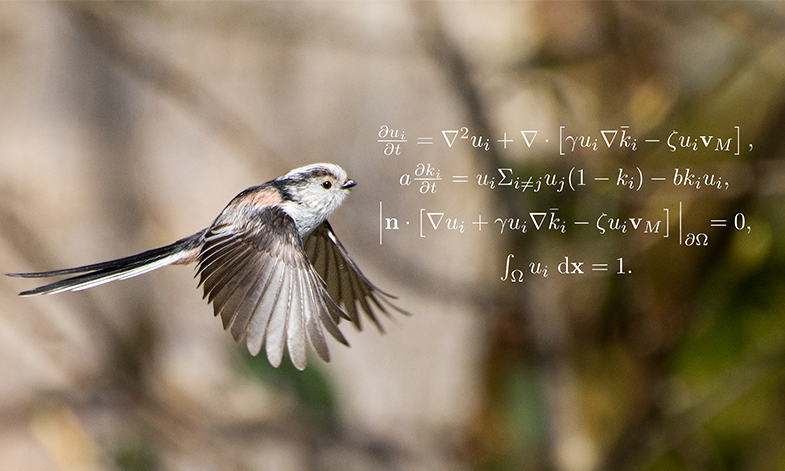 Scientists from the University of Sheffield have used mathematical modelling to understand why flocks of long-tailed tits segregate themselves into different parts of the landscape.

The team tracked the birds around Sheffield’s Rivelin Valley which eventually produced a pattern across the landscape, using maths helped the team to reveal the behaviours causing these patterns.

The findings, published in the Journal of Animal Ecology, show that flocks of long-tailed tits are less likely to avoid places where they have interacted with relatives and more likely to avoid larger flocks, whilst preferring the centre of woodland.

It was previously unknown why flocks of long-tailed tits live in separate parts of the same area, despite there being plenty of food to sustain multiple flocks and the birds not showing territorial behaviour.

The equations used to understand the birds are similar to those developed by Alan Turing to describe how animals get their spotted and striped patterns. Turing’s famous mathematics indicates if patterns will appear as an animal grows in the womb, here it's used to find out which behaviours lead to the patterns across the landscape.

Territorial animals often live in segregated areas that they aggressively defend and stay close to their den. Before this study, these mathematical ideas had been used to understand the patterns made by territorial animals such as coyotes, meerkats and even human gangs. However, this study was the first to use the ideas on non-territorial animals with no den pinning them in place.

Natasha Ellison, PhD student at the University of Sheffield who led the study, said: “Mathematical models help us understand nature in an extraordinary amount of ways and our study is a fantastic example of this.

“Long-tailed tits are too small to be fitted with GPS trackers like larger animals, so researchers follow these tiny birds on foot, listening for bird calls and identifying birds with binoculars. The field work is extremely time consuming and without the help of these mathematical models these behaviours wouldn’t have been discovered.”

The work forms part of the University of Sheffield’s Mathematical Biology Group, which brings together researchers from the University’s School of Mathematics and Statistics and the Department of Animal and Plant Sciences.