Two University of Sheffield alumni will begin their bid to become the first couple to run the length of South America later this month, to raise money for environmental charities. 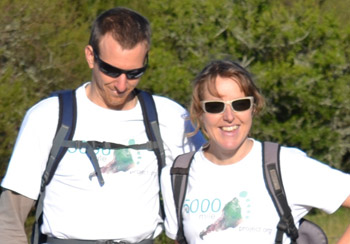 Ecologists Katharine and David Lowrie will begin their year-long epic journey on 27 July 2012, the day that the London Olympics start. The couple aim to raise money for BirdLife International and Conservacion Patagonica, to buy and conserve threatened habitats in South America.

Through online media - 5000mileproject.org - they also want to connect people from around the world to South America’s wildlife and wildlands and inspire environmental action to conserve them. The pair met whilst studying at the University in 1997 and married in 2008.

The distance of the expedition, over 5,000 miles, will be the equivalent of running over 200 marathons in a year. The pair will run through a freezing Patagonian winter, battle gale force winds in the Argentine Pampas and endure months of steaming heat in the Amazon rainforest. The journey will be unsupported – meaning they will pull all their expedition gear themselves in a specially designed trailer made of recycled materials.

Katharine said: “We hope that through sweat, tears and determination, we’ll open a portal into the last wilds of South America and rekindle people’s passion for running and our amazing natural world. It's not too late to protect the world's remaining unspoilt ecosystems, but time is running out.

“I think people have become jaded about the Amazon issue, as twenty years on, it is still there and it still needs people’s help. The sad reality is that millions of hectares have been lost to logging, settlement programmes, agriculture and other development.”

She added: “The 5000 Mile Project is about reminding everyone that we all impact South American habitats already. But that we can each, wherever we are and whoever we are, do something to help, whether that is ensuring we buy forestry assured timber and buying local food and cutting back on using the car and plastic bags. People can also donate to our charities BirdLife International and Conservacion Patagonica at www.5000mileproject.org.”

Katharine and David are both committed conservationists and keen explorers. The couple sailed to the Caribbean in 2008 and undertook the first complete breeding seabird census off the Eastern Caribbean and an extensive marine education programme. They have also sailed over 20,000m in a circumnavigation of South America, surveying seabirds and other wildlife. They are currently based in Uruguay, planning and training for the 5000mileproject expedition.

For the Press Room, including high res photos visit: www.5000mileproject.org/pressroom

With nearly 25,000 students from 125 countries, the University of Sheffield is one of the UK´s leading and largest universities. A member of the Russell Group, it has a reputation for world-class teaching and research excellence across a wide range of disciplines.