A pioneering building which broke new ground when it was unveiled almost 50 years ago will become the pride of the University campus once again when it undergoes a refurbishment costing over £20 million, which will begin this summer. 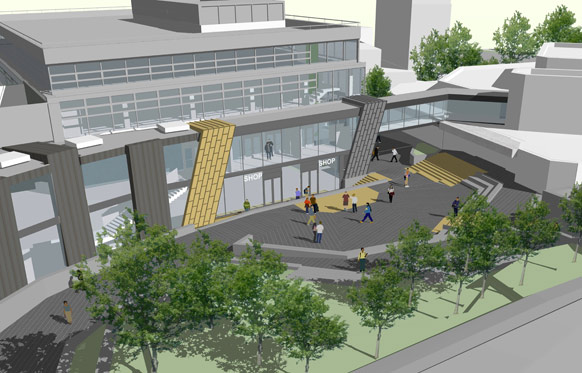 University House, which was one of the first glass curtain walled buildings in the world when it was completed in 1963, will be transformed into a new world class facility for students, staff and the community at the heart of the campus, as well as being integrated with the University’s award-winning Students' Union – the number one in the UK - in one single building.

The newly refurbished and redesigned building will provide state of the art facilities for student services, an amphitheatre styled space for special events will be created within the new Octagon Plaza, as well as more social and study spaces open for longer hours.

The 21st century makeover, which has been designed by Sheffield based HLM architects, will continue the University’s commitment to offering the best facilities, with six new meeting rooms and improvements to the City View Cafe and Fusion and Foundry. The landscaping continues with significant improvements to pedestrian access and the planting of trees and shrubs as natural screens, adjacent to Western Bank. 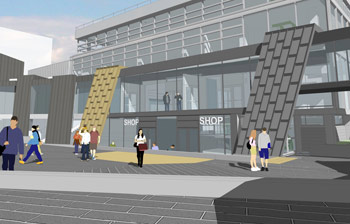 Robert Smith, a fellow of the Royal Institute of British Architects, spent 12 years at the University from the late 1950s designing 11 buildings – including the Arts Tower and University House – while working for architecture firm Gollins, Melvin and Ward.

Mr Smith said: “University House was designed to be a bit like the Arts Tower - it was a groundbreaking design. We were pioneers in glass curtain walling and this was one of the very first.

“It was a very fresh building design and very simple. It offered some of the best views of Sheffield, and still does now. It was designed to be unrestricted and benefited from not needing offices or room dividers so it was much more open than the other University buildings. We wanted to get as much light in as possible.”

University House was one of the key buildings in the master plan of Gollins, Melvin and Ward of 1953, and was the pride of the University when it was completed ten years later. It has been added to several times and only the Glossop Road side of the building shows how it would have looked originally.

The new, integrated building will meet the needs of everyone on campus, with the whole complex being renamed the Students' Union Building.

The University is committed to ensuring that any disruption is kept to a minimum during refurbishment work, which is expected to start on July 23 2012 and finish in September 2013.