World leading science research from the University of Sheffield is helping to solve the problem of limited food availability and soaring food prices which hit the Middle Eastern country of Oman every summer through the creation of innovative sustainable greenhouses.

The pioneering design incorporates various cutting-edge technologies developed at the University to help crops to grow, including solar power to convert seawater to freshwater and hydroponics systems, which use foam instead of soil.

The first greenhouse has been developed as part of a collaboration with Sohar University in Oman. Scientists at Sheffield were approached by the university to construct a greenhouse that cools rather than warms and can deal with issues like a lack of water and soil degradation - a massive problem particularly in the Gulf.

Protected growing in greenhouses is already widespread in Europe and enables the production of a range of high value crops including tomatoes, cucumbers, peppers, salad leaves, herbs and also soft fruits and flowers.

However current designs have a number of issues, in particular high demands for water and energy and potential for environmental problems through fertiliser and pesticide runoff. They are also unsuited to the particular environmental conditions of the Gulf region, with extremely hot weather in the summer and the limited availability of freshwater.

Scientists have designed the greenhouse in Sohar so that plants are supported artificially and suspended away from the ground. Using foam as the artificial material - made in labs in Sheffield - eliminates the need for soil. The foam holds nutrients and water around the plant roots rather than allowing it to run off like it does in soil.

Duncan Cameron, professor of plant and social biology at the University of Sheffield, who has helped lead the project in Oman, said: “Geographically Oman is a difficult country. It reaches highs of 50 degrees in the summer with 65 per cent humidity and struggles to grow anything. This leads to food prices quadrupling in the summer.

“We had to create a greenhouse that can produce fruit and vegetables in the heat of summer in Oman but can be dropped as a package anywhere and be made bespoke.

“We’re delighted to be unveiling the first science-led greenhouses to provide fresh local fruit and vegetables. We hope to work with other communities living in some of the world’s harshest climates to develop more greenhouses.”

On Wednesday 13 March 2019 the University of Sheffield and Sohar University officially launched the first greenhouse at the Sohar campus. 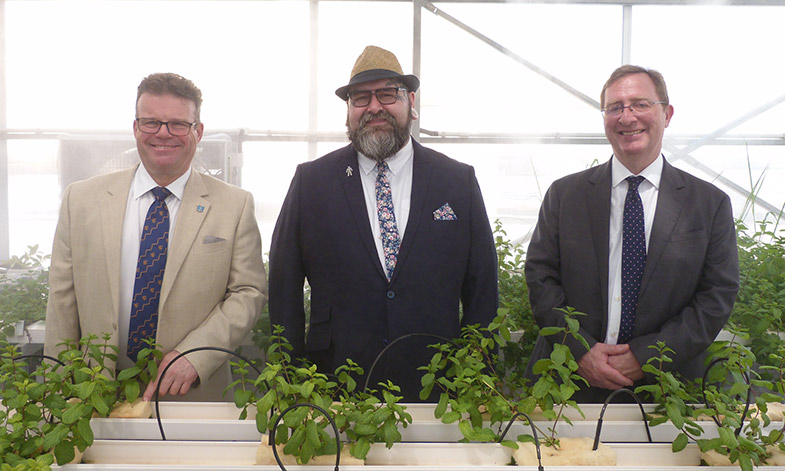 The greenhouse, which is 150m2, will be used as a research facility, demonstrating the potential to produce fish, vegetables and herbs.

Professor Ryan, said: “We’re delighted to be unveiling the first science-led greenhouses to provide fresh local fruit and vegetables. We hope to work with other communities living in some of the world’s harshest climates to develop more greenhouses.”

The greenhouse forms part of a larger microcosm farming project by Grantham Centre for Sustainable Futures at the University of Sheffield which aims to help feed the world’s growing population. Scientists hope that these greenhouses can become be tailored to the specific needs of any country or location.

The University of Sheffield and Sohar University collaboration has received funding from the UK Gulf Institutional Links programme via the UK government’s Department for Business, Energy and Industrial Strategy (BEIS). Part of the UK Government's strategic commitment to strengthening partnerships with the Gulf countries.

The Grantham Centre
The Grantham Centre for Sustainable Futures is an ambitious and innovative collaboration between the University of Sheffield and the Grantham Foundation for the Protection of the Environment. The Centre’s sustainability research creates knowledge and connects it to policy debates on how to build a fairer world and save natural resources for future generations.