A pioneering voter registration scheme at the University of Sheffield, which has ensured three quarters of its students are on the electoral roll, has been praised by the Minister for the Constitution. 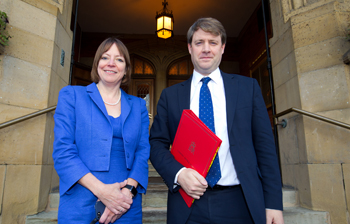 Chris Skidmore MP visited the University today (1 December 2016) to hear how a successful initiative, which sees students register to vote as part of the start-of-term university registration process, has had an impact on the number of students registered to vote.

The University piloted the scheme with Sheffield City Council at the start of the 2014-15 academic year with the aim of boosting student awareness of the benefits of registering to vote and improving the level of student electoral registrations.

The ‘Sheffield model’ has since been cited in Parliament as an example of best practice.

Chris Skidmore, Minister for the Constitution, said: “This Government is determined to build a democracy that works for everyone and it is heartening to see different people across communities in Yorkshire engaging their friends, neighbours and colleagues to ensure they remain an active part of our democracy.

“In particular, the work that the University of Sheffield is carrying out is making a big difference to how young people are engaged in politics. Their innovative project has seen a huge increase in registration rates. I am excited to see how all communities, schools, colleges and universities across the UK can all learn from their approach.” 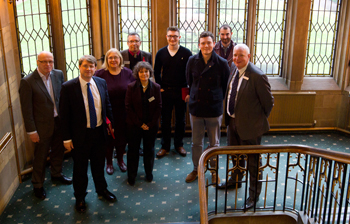 Professor West said: “Universities are an integral space where students can share their ideas and have open and constructive debate. Student views can make a vital difference to society, and at the University of Sheffield, we are committed to making it as simple as possible for our students to register to vote.

“By integrating voter registration into our enrolment process at the beginning of term, three quarters of our students are now on the electoral roll. We were delighted to welcome the Minister and to show him the impact this innovative project has had in Sheffield.”

Dominic Trendall, President of Sheffield Students’ Union, added: “As a Students' Union, we are really proud to have been part of the effort to ensure that the voices of students are heard in Sheffield.

“Students do want to engage with the community and with the democratic process and it is so important that we break down artificial barriers to participation in elections.”