The University of Sheffield’s Vice-Chancellor highlighted the rich benefits international students bring to the UK at a high-profile event in India.

Professor Sir Keith Burnett was joined by the Vice-Chancellor of De Montfort University Leicester, Professor Dominic Shellard, at a joint event with Universities UK, the UK Council for International Student Affairs and the British Council to answer questions about studying in the UK.

Sir Keith also highlighted the #WeAreInternational campaign which he personally founded with the Sheffield Students' Union and now has more than 100 universities and organisations across the UK supporting efforts to welcome international students, staff, research and collaborations in higher education.

The campaign stands in stark contrast to concerns overseas that the UK is raising barriers to study, and has been backed by sector bodies, including Universities UK and the National Union of Students, the British Council and Foreign Office. 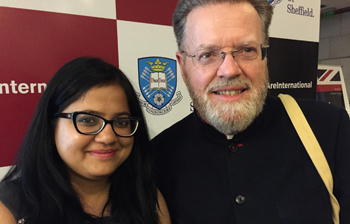 Sir Keith said: “Our great universities are at their core places of international scholarship which welcome ideas and talent from around the world. The University of Sheffield has students from 140 countries with 2,300 graduates in India alone now working as doctors, judges, architects and engineers. The contribution of international students enriches our universities and cities, and the education they gain is in turn helping to build this incredible country."

He added: “We are urging the British government to recognise these benefits in word and deed, and to help us welcome students as the wonderful asset they are to our universities and communities. The relationship between the UK and India in our modern times is most positively found between those who have studied together in our universities and who have undertaken collaborative research to address shared challenges in medicine, energy and food security."

At the event, guests and journalists also had the opportunity to hear the experiences of Indian students, both on film and in person, who recently chose to study in the UK. The Chief Executive of the UK Council for International Students, Dominic Scott, led a lively session in which he drew out the humorous and inspiring experiences of graduates recently returned to India.

Presentations were also given by Professor Shellard, Nicola Dandridge, Chief Executive of Universities UK, and Richard Everitt of the British Council in India.