Smoking increases both men’s and women’s risk of a major heart attack at all ages, but women smokers have a significantly higher increased risk compared to men - especially those aged under 50, according to research led by Sheffield Teaching Hospitals NHS Foundation Trust in partnership with the University of Sheffield.

The findings, published in the Journal of the American College of Cardiology, showed that despite the increased risk, smokers can reduce their risk to that of someone who has never smoked in as little as a month after quitting. 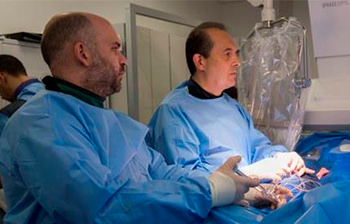 Heart disease is the number one cause of death for women and men worldwide, and acute ST Segment Elevation Myocardial Infarction (STEMI) is among the most life-threatening forms of heart disease. STEMI is sometimes called a major heart attack and is caused by a complete blockage of one of the main coronary arteries.

Smoking is a risk factor for heart disease and researchers have previously identified smoking as the cause of STEMI in nearly 50 per cent of all cases. However, none have quantified and compared the incidence of STEMI associated with smoking between genders and within different age groups.

In the research the authors sought to assess smoking as an independent risk factor for STEMI and determine the differences in risk between age groups and genders.

They used a retrospective ecological cohort study to compile data for all patients in the South Yorkshire region of the UK who presented with acute STEMI between January 2009 and July 2014, which included 3,343 STEMIs. The percentage who were current smokers was similar between genders, with 46.8 per cent of female patients and 47.6 per cent of male patients.

They found that smoking increases STEMI risk in all patients, regardless of age or gender, but the risk is higher in females compared to males at all ages. The largest relative risk difference between men and women smokers was in the 50-64 years old group, but the highest risk increase in both genders was in the 18-49 years group—the youngest group.

Female smokers in this age group had a greater than 13 times higher risk of STEMI compared to their non-smoking female contemporaries. Young male smokers had an 8.6 times increased risk.

The findings are the first to shed new light on the striking risk impact that smoking has in provoking major heart attacks, especially in younger and female smokers. Although a risk has been known to be present for many years, its magnitude was unclear and undefined.

The authors of the study proposed several possible reasons why smoking leads to such a greater risk of STEMI for females, including that smoking may lower levels of serum estrogen. Estrogens, which have long been known to have protective effects against atherosclerosis, which is a build-up of fats, cholesterol and other substances within artery walls that can restrict blood flow, are inhibited in female smokers. Also, men have been found to have larger coronary arteries than women, meaning that chronic inflammation from smoking may lead to a greater degree of arterial narrowing in women than men since their arteries are narrower to begin with.

Several other vascular conditions are more prevalent in female STEMI patients, including vasospasm, vasculitis and spontaneous coronary artery dissection. The researchers said it is highly likely that smoking perpetuates some of these events and imposes a greater increase in STEMI risk for women.

However, researchers also found it is possible to substantially reverse the risk by quitting smoking.

“Our study found that smoking cessation, regardless of age or gender, reduces STEMI risk to that of a never smoker, possibly within a month,” said Dr Ever Grech, from the University of Sheffield’s Department of Infection, Immunity and Cardiovascular Disease and consultant interventional cardiologist at Sheffield Teaching Hospitals NHS Foundation Trust.

“Patients who smoke merit encouragement to give up their habit, and this study adds quantitative evidence to the massive benefits of doing so.”

Researchers also speculated that since a previous study had shown that physicians perceived coronary artery disease in males as being more important than in females, professional advice on smoking cessation may differ between genders if smoking is considered to be less of a cardiac risk for females.

“For the first time, this study provides a numerical hazard which specifically focuses on the cardiac risks of smoking in a way that is much easier to understand,” Dr Grech added.

“I hope this will not only correct the perception in young smokers that heart attack risks arise much later in life, but also publicise the real dangers of smoking in a contemporary population.”

The study had several limitations, including that it did not provide information about intensity of smoking or duration of smoking cessation in ex-smokers who were defined as being abstinent for at least one month. It also only included patients presenting with STEMI as a candidate for percutaneous coronary intervention (a non-surgical procedure used to treat narrowing (stenosis) of the coronary arteries of the heart found in coronary artery disease) and did not include those who died in the community prior to admission.

The Journal of the American College of Cardiology ranks among the top cardiovascular journals in the world for its scientific impact.