The writing is on the wall for smog as the University of Sheffield unveils the world’s first air-cleansing poem, a new work by award-winning writer Simon Armitage. 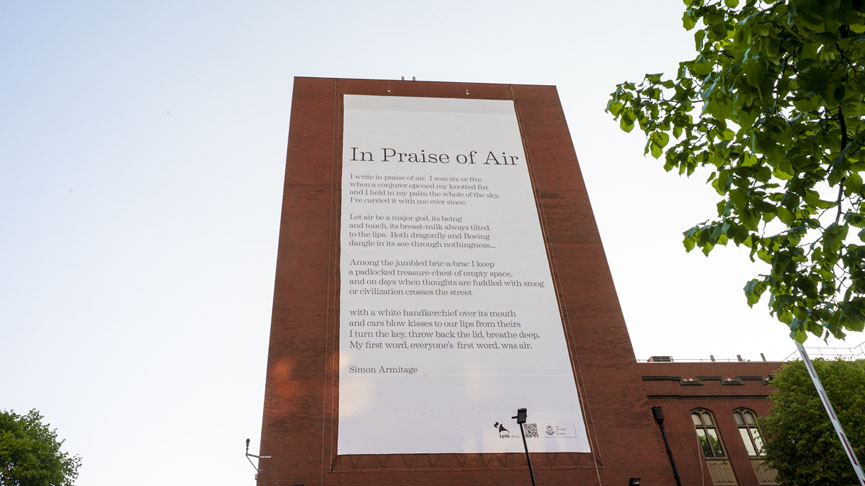 Simon, Professor of Poetry at the University, and Pro-Vice-Chancellor for Science Professor Tony Ryan, have collaborated to create a catalytic poem called In Praise of Air - printed on material containing a formula invented at the University which is capable of purifying its surroundings.

This cheap technology could also be applied to billboards and advertisements alongside congested roads to cut pollution.

Professor Ryan, who came up with the idea of using treated materials to cleanse the air, said: “This is a fun collaboration between science and the arts to highlight a very serious issue of poor air quality in our towns and cities.

“The science behind this is an additive which delivers a real environmental benefit that could actually help cut disease and save lives.

“This poem alone will eradicate the nitrogen oxide pollution created by about 20 cars every day.”

He added: “If every banner, flag or advertising poster in the country did this, we’d have much better air quality. It would add less than £100 to the cost of a poster and would turn advertisements into catalysts in more ways than one. The countless thousands of poster sites that are selling us cars beside our roads could be cleaning up emissions at the same time.”

The 10m x 20m piece of material which the poem is printed on is coated with microscopic pollution-eating particles of titanium dioxide which use sunlight and oxygen to react with nitrogen oxide pollutants and purify the air.

The poem will be on display on the side of the University's Alfred Denny Building, Western Bank, for one year and its unveiling also marks the launch of this year’s Sheffield Lyric Festival which takes place between 14-17 May 2014 at the University’s Firth Hall.

At a special celebratory event on Thursday (May 15 2014), Simon will read In Praise of Air for the first time in public and Professor Ryan will explain the technology behind the catalytic poem. Volunteers will be wearing catalytic T-shirts.

Professor Ryan has been campaigning for some time to have his ingredient added to washing detergent in the UK as part of his Catalytic Clothing project. If manufacturers added it, the UK would meet one of its air quality targets in one step.

Dr Joanna Gavins, from the University’s School of English, project manager for the catalytic poem collaboration, who also leads the Lyric Festival, said: “This highlights the innovation and creativity at the heart of the University and its research excellence.

“We are delighted that such a significant event will help launch this year’s Lyric Festival which also features poetry readings by students of the MA in Creative Writing, alongside internationally renowned writers such as Sinead Morrissey and Benjamin Zephaniah, and music from celebrated Sheffield songwriter, Nat Johnson.”

Simon added: “There’s a legacy of poems in public places in Sheffield and, on behalf of the University, I wanted to be part of that dialogue to show what we could do.

“I wanted to write a poem that was approachable, that might catch the attention of the passer-by and the wandering mind, and one that had some local relevance too. But I also hope it's robust and intricate enough to sustain deeper enquiries – the School of English looks towards it for one thing, and I'd like to think it's capable of getting the thumbs up or at least a nod from their direction, and from the big-brained students walking up and down Western Bank, and from discerning residents in the neighbourhood.”

He added: “I've enjoyed working with the scientists and the science, trying to weave the message into the words, wanting to collaborate both conceptually and with the physical manifestation of the work.

“Poetry often comes out with the intimate and the personal, so it's strange to think of a piece in such an exposed place, written so large and so bold. I hope the spelling is right!”

For more information about the Catalytic Poetry project, visit http://www.catalyticpoetry.org/

A version of the poem will be showcased during a late night exhibition at the Natural History Museum on Wednesday 11 June 2014 as part of Universities Week.

To find out more about the catalytic clothing project visit http://www.catalytic-clothing.org

The Lyric Festival is the Faculty of Arts and Humanities’ annual celebration of the written and spoken word. Each May the festival brings some of the UK’s most renowned and respected writers, broadcasters, academics, and performers to the University, as well as showcasing the talent of Faculty students and staff. For more information visit https://www.sheffield.ac.uk/lyric