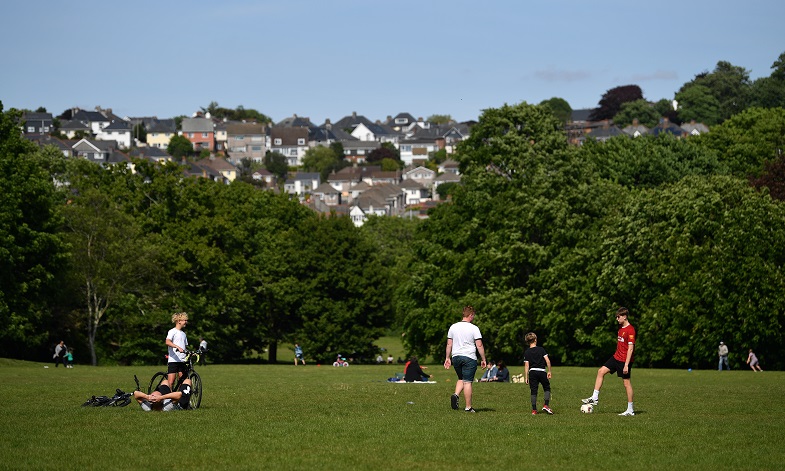 More than half of young men aged 19-24 have breached the UK’s lockdown rules by meeting with a group of friends, according to a study showing they are far less compliant than other young people.

This group was also more likely to think they were not at risk of catching Covid-19 or spreading it to others, and that following the government’s guidelines was not worthwhile. The findings suggest ministers need to explain the reasons for ongoing physical distancing rules as they begin to lift some lockdown measures.

Researchers from the University of Sheffield and Ulster University found one in five men aged 19-21 have been dispersed, arrested, fined or taken home by police for breaking the rules – compared with just one in 10 women of the same age.

The team of psychologists, led by Dr Liat Levita from the University of Sheffield, surveyed a UK representative group of 2,000 13-24-year-olds to examine the impact of the pandemic on young people at different stages of development, and identify the factors influencing their mental resilience.

Their initial findings show 40-50 per cent of young people are feeling significantly more anxious than they did before the outbreak. The youngest teenagers showed the highest rates of anxiety, while older groups showed lower levels of overall wellbeing.

More than half of young people said they are now more worried about their parents or family than usual. Those whose parents are key workers demonstrated significantly higher levels of Covid-19-related anxiety and trauma and worse overall wellbeing.

Levels of anxiety and depression were up to 10 per cent higher for black and mixed race survey participants than white and Asian groups.

Across all ages, a majority of those surveyed said they were not engaging in basic hygiene practices such as washing hands more often – and this was worse among older age groups. However, most said they intended to follow the guidelines in the coming weeks and thought doing so was worthwhile.

Sometimes, young people have difficulties carrying out their intentions due to peer pressure – so the psychologists asked how participants expect to be affected by peer pressure to break lockdown rules. For young women, 20 per cent said they would be willing to accept an invitation to join friends at a park – but this contrasts with their reported behaviour, which suggests over 90 per cent have been following the lockdown rules. Young men responded more consistently – with older groups in particular more willing to break the rules, exactly in line with their reported behaviour.

What was consistent across all ages and genders was that one in five young people were willing to stand close to their friends and chat if they met them on the street.

Men aged 19-24 were likely to have a positive perception of people their age who break the rules, regarding them as more ‘cool’ and ‘independent’, while other groups saw these people as more ‘self-centred’ and ‘immature’.

Dr Liat Levita, Senior Lecturer at the University of Sheffield and Principal Investigator of the study, said: “It is really striking how much older male adolescents stand out in terms of violating physical distancing rules. This is consistent with what we know about their greater tendency to take risks, and reflects their belief that following the guidelines isn’t worthwhile.

“Explaining the reasons behind ongoing physical distancing measures will be crucial to persuading young men to follow the rules as the government begins to ease the lockdown.

“Our young people are growing up in a time of pandemic, and our study is helping us understand the implications of this on their current and future wellbeing. We should applaud them on how they are managing to cope, but recognise that the impact on them is significant – with over 50 per cent experiencing higher levels of anxiety and worry.

“We should also be careful in painting an overly bleak picture. Not everyone will experience this period negatively, and we found that some of our teens are enjoying being at home with their parents more than ever, and are not more anxious or worried than before.

“We are now investigating the factors that support young people’s resilience in the short and long term, to shape future government policy targeted specifically at helping them through this period of unprecedented uncertainty.”

The team plans to survey the same group in the future to investigate the longer term impacts of the pandemic on their wellbeing.