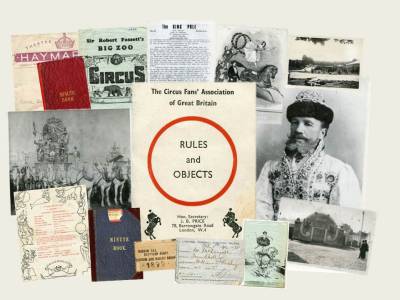 The National Fairground Archive is celebrating the donation of the Circus Friends Association Archive to the University of Sheffield; A major collection of circus material containing thousands of posters, handbills, photographs and other circus related items.

The Circus Friends Association (CFA), previously known as the Circus Fans' Association, was established in 1934 to stimulate, foster and promote enthusiasm for circus and related performances as part of British culture and has collected one of the most fascinating and important collection of circus related material in the United Kingdom.

Angela Haighton, Head of the NFCA & Digital Humanities at the University of Sheffield Library, said, “We are very excited to receive this unique collection which tells the global story of circus since the eighteen century. As a popular form of entertainment  the circus is an significant part of our social history. The donation of this important collection to the NFCA means we can make it more widely accessible and preserve it for future generations. It also reinforces our position as the leading repository for circus and fairground archives, which attracts both local and international researchers to the University of Sheffield.”

The NFCA can now boast of holding one of the largest public archives on circus in the United Kingdom, adding an increadible wealth of new material to its already world renowned collection of archives and literature relating to the history of popular entertainment. 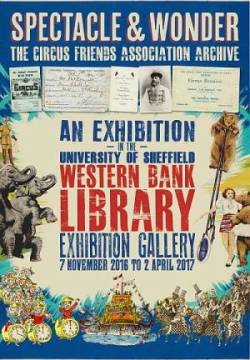 This significant event in the history of the NFCA will be celebrated with an exciting new exhibition entitled ‘Spectacle and Wonder: The Circus Friends Association Archive’, which runs from 7 November 2016 until 2 April 2017 at the University of Sheffield’s Western Bank Library and is open to the public, free of charge.

The exhibition will be dedicated to the memory of the late Malcom Clay, CFA’s archivist for many years. It will showcase rare and important posters, handbills, programmes and archives from Britain’s leading twentieth century circuses, including Bertram Mills’, Billy Smart’s, Robert Brothers, Chipperfield’s, Fossett’s, and Blackpool Tower together with interviews with CFA members recalling their personal memories of circus and the CFA www.sheffield.ac.uk/library/exhibition