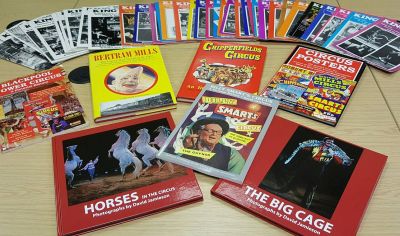 We are very pleased to announce the donation of David Jamieson’s collection to the National Fairground and Circus Archive.

This donation is the culmination of a long lasting relationship with the University of Sheffield Library. David was instrumental in the housing of the Circus Friends Association collection at the Archive and over the years helped us build one of the most comprehensive public circus literature collections in the UK.

David sadly passed away in 2017 after a long battle with Parkinson’s disease. With a lifelong passion for circus, he amassed an enormous amount of knowledge about the subject which he recorded both in writing and through photography, creating an important and unique legacy for the future.

David’s collection is a reflection of a 60 year labour of love. He visited circuses all over the world and created close links with some of the biggest names in the industry. He was a respected and recognised expert in the field with an in-depth knowledge and experience of the world of animal and human performance, and the life of circus people.

David researched, photographed and wrote about circus tirelessly, and for a short while, he even experienced it first hand, travelling with Chipperfield’s and designing programmes and souvenir guides for the Circus World Championships as well as some of the most important British circuses of the 20th century. Additionally, David was a lifetime member of the Circus Friends Association of Great Britain and the Editor of the King Pole for 43 years. He also wrote articles for other newspapers including; The Guardian and The Independent, and was the author and editor of many circus books whilst his photographs have been widely published around the world.

His personal archive is complemented by a large library, a collection of programmes, posters, correspondence and other ephemera covering British, European and American circuses and firmly establishes the NFCA as the largest public circus repository in the UK.

David’ s archive joins together with other important circus collections in the Archive, namely the CFA, the John Turner, the Hal Fisher, the Smart Family and the recently acquired Derek Simpson Collections, to create one of the most important collections of British circus history in the world.