Our formidable Dutch Society (Nederlandse Vereniging) put on a play on 21 March 2022. It was our contribution to the SLC Drama Festival 2022. Mari Hauer and Emma Haliburton reported on our progress: 'Baltazar Krull's heart Sings Moonshine'.

Putting on a play is hard work, but also really good fun. Particularly if you write it yourself and embrace the concept of bricolage. Baltazar Krulls hart zingt maneschijn was written and directed by students of Dutch at the University of Sheffield and by Filip de Ceuster. The performance on 21 March 2022 was a resounding success. Here is a video impression of the lay and a short and a week-by-week overview of how the play was put together by our reporters are Emma Halliburton and Mari Hauer.

On Wednesday 9 February 2022, we began our journey towards a ‘Dutch Delight of Random’. After some difficulties finding the lecture room (at least for a few of us), the rehearsals were underway. A strong first reading of the script revealed some undiscovered acting talents including: Jordi as ‘Jordi’, June as the devoted ‘Gids 2’, and Theo’s hair as the perfect imitator of Vincent van Gogh’.

To celebrate our first rehearsal, we enjoyed some chocolate cake (pictured above), which is a Low Countries tradition: after the first day of rehearsals in the Netherlands and Flanders, the cast needs cake!

One rehearsal down and just five more to go! In the upcoming weeks, we will be working on all things NV Play, and even without the promise of cake in the next rehearsals, the future looks bright. Our hearts sing moonlight too! Tot volgende woensdag mensen!"

Wednesday 16 February saw us kick off our second week of rehearsals of our bricolage Anglo-Dutch performance. Before we got started, Filip, Lottie, Theo and Gemma, scouted out the location for the play. This will be in the Drama Studio which can seat up to 170 people. Full capacity on the night, we’re sure!

With this in mind, we could start visualising the space and how to work it (seen in the photo above). Due to the student protests at the Hicks Building, we trekked down to Pam Liversidge and picked up from ‘de proloog’. Unphased by this room change, everyone took on their assigned roles with such ease, you would think they were destined for the stage. After a few run throughs, it really started to come together as everyone began to find their feet.

Also Yeti joined us for the second half of the rehearsal – in Dutch we say ‘repetitie’ – and we began to envisage Act 1. We all chip in and change as we see fit. Without revealing too much, next week we hope to develop each person’s role and the next part of the script.

By Emma and Mari

It’s the third week of Baltazar Krull rehearsals, and with that, only a month to go to the big day. We have made so much progress in such a short time and the play is really coming together. Wat een getalenteerde mensen!

This week’s rehearsal was not like the others, in that we started without Filip and the final years – they had a session with our Belgian Writer in Residence, the playwright Rashif El Kaoui, whose play they are currently translating. Although it was not the same without them, we pushed through and did a great job practising and visualising Filip’s new editions to the script – even managing to add some choreography.

This week we were so happy to be joined by Kirith Bongaerds, this semester’s Dutch Taalunie-assistant, and her short monologue sounded prachtig! A natural talent!

In the second half we were back to full strength, joined once again by our fellow cast members. You can see the workings of our tram scene below. Another successful week!

By Emma and Mari 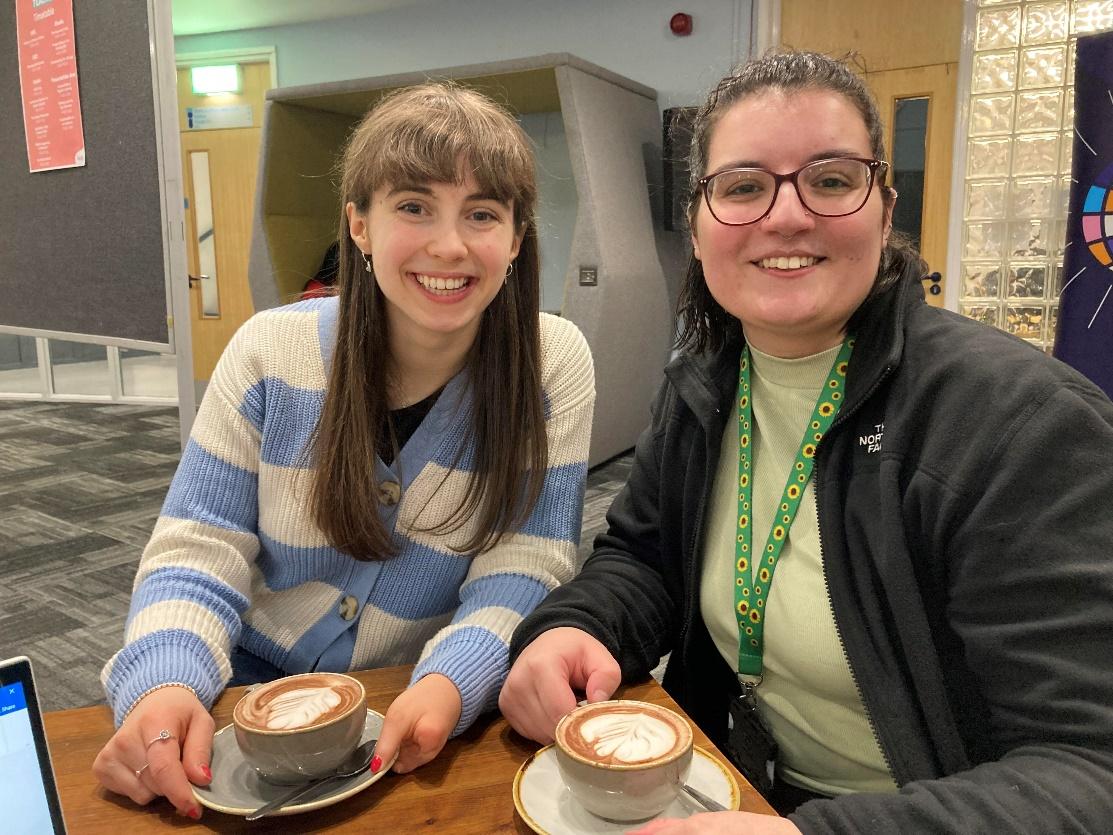 With just two weeks till the big day, Mari Hauer sat down with Nederlandse Vereniging President, Lottie Armett (left), and Vice-President, Poppy Mainwaring (right), to get an insight into the workings of the play.

Although we have been working hard for five weeks now, Poppy tells me that this play has been "in the works for a really long time". In fact, since last April.

Lottie – “The first time that Poppy and I met, when we’d first been elected as President and Vice-president, we were talking about our ideas for the society and what we wanted to do, and having both done A-level Drama, we both said we were really keen to do a Dutch play. So, we took the idea to Filip, and the rest is history.”

Now, almost a year later, we are excited and almost ready to show the payoff from this idea. This week in rehearsals, we pushed forward again with the script and continue to build on the scenes with movement and choreography. With just over a week to go,  it is great to see everything coming together with the finish line in sight.

Poppy – “Most of the play is completely blocked. We’ve read through the whole thing. We are working to a very tight schedule, because the play is in ten days' time. But the rehearsals have been going really well. Especially as people have to come and go - we’ve done a really good job of working around that.”

Today, we also saw the workings of the scene ‘Jordi, de liftboy!’  This is quickly becoming a favourite part for the cast. Why?

Poppy – “It came out of nowhere. Jordi the liftboy has been in the script from the very start, and that is really saying something, given how much the script has changed. And I don’t think we ever imagined that it would be quite this iconic of a moment, where the whole cast is bundled [in the lift] together, in the middle of the stage around Jordi. It just came out of a spur of the moment idea. That moment epitomises everything that this play is about.”

This week we also saw our tickets being released! Tickets can now be purchased through the Student Union’s event page under the Clubs and Society Events – or for ease just follow the link below! In light of this, I ask Lottie and Poppy to describe the play and why people should come to watch it.

Poppy – “It’s a story without a story, really… It’s almost a showcase of our camaraderie, friendship, hard work and how far we’ve come with learning Dutch.”

Lottie – “The word we used when we first started designing the play was bricolage, which is when different pieces are put on top of each other to form the play. So, we’ve got music, acting, spoken word. We’ve got Dutch and English mixed in – it’s going to be a bilingual play. So, it’s really accessible to people whether you speak Dutch or not.”

Poppy – “It’s a bit of fun for everyone involved. It might be a bit off-putting for English speakers, the idea that it’s in Dutch, but as we’ve said it’s bilingual. There are parts that are in Dutch, but there are also parts that are in English. But it’s fun, we’re having fun, and we want people to come and join us, and to see and celebrate how far we’ve come”.

“It’s a celebration of everything that is random!” adds Lottie. Don't miss it!

Lottie and Poppy – "We would like to say a massive thank you to Filip De Ceuster and give him his due credit, because we went to Filip with this idea of a play and he has created it all. It’s his vision and baby, and we couldn’t have actually put a play together without him.

We also would like to thank the Nederlandse Taalunie, who have paid for the venue. They have been an essential part of allowing us to do this.

And finally, thanks to the cast and crew, for everyone who’s volunteered and given up their time in any way. It goes without saying that we could not have done it without those who are giving up their time to make this happen!"

And I think I can say on behalf of the whole cast, a huge thank you to Poppy and Lottie for their hard work and dedication to the play!

This Wednesday marked the fifth week of rehearsals for our Dutch play, ‘Baltazar Krull.’ The performance is definitely coming together: interactions between the characters and the added scenery, such as the tram and the painting projected onto the back wall, really brought the scenes to life.

We picked up after the second monologue, with the highly-anticipated introduction of Sinterklaas, played superbly by Alice Willett. The teamwork and support among the company was as strong as ever, with helpful comments and suggestions about staging and line delivery at every opportunity. Even more impressively, the present company members adapted seamlessly to several absences: Kirith Bongaerds stepped in without hesitation to take on the role of Baltazar himself, and everyone covered lines they had never rehearsed before with ease and professionalism. Wat bewonderenswaardig!

Refusing to let COVID dilute their enthusiasm, Filip De Ceuster and Lottie Armett were able to join rehearsal via the power of Google Meet. With useful tips from Filip, the cast practised exaggerating their Dutch pronunciation to ensure that the play is as accessible and understandable to English speaking audience members. After all, this is a play for everyone and not just those with a background in Dutch!

The rehearsal concluded with our resident Head of Wardrobe, Theo Taylor, providing insight on how to make the costumes fit with the time period whilst maintaining a unique flair for each character. Filip also ran through our plans for the final week of rehearsals, including moving into the Drama Studio for tech next Friday!

Until then, you still have time to buy your ticket through the Student Union’s event page and join us on the Monday 21st of March. We can’t wait to show you all what we’ve been working on!

By Sophie Moss and Mari Hauer

Events at the University