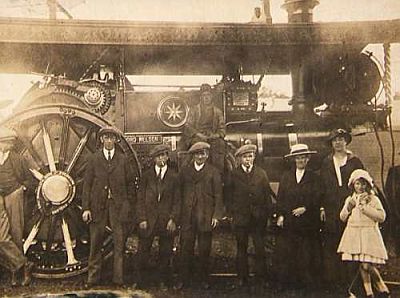 Title: The Anderton and Rowland Collection

Scope: This collection contains copies of original photographs and photocopies of newspaper cuttings relating to the Anderton and Rowland families and their business on the fairground.

Administrative / biographical history: Albert Haslam was born in Sheffield in 1851. He left home at an early age and learned magic and illusion from John Henry Anderson, the great Wizard of the North. After the death of his teacher, he took the slightly amended name of Professor Anderton travelling with some of the greatest shows including Randall William' Ghost Show.

During the late 1800's the circus and menagerie toured the UK with Albert's son, Arthur, becoming Captain Rowland, the animal trainer. The menagerie was sold in 1898 to pay of debts and Anderton then toured as Fourpawrs circus.

Anderton invested in the development of a new novelty, animated pictures and the show became known as 'Anderton and Rowland's Grand Empire Palace. In 1906 a new show front was commissioned from the Orton and Spooner Company which included a Marenghi organ in the centre, still owned today by the company. There were light bulbs lit up at night that changed colour in time to the music.

Since the 1950s, the firm has continued to expand and the name Anderton and Rowland is now in its 5th generation. It is owned by the De-Vey family and is the biggest fairground operator travelling in Devon and Cornwall.

Related Collections:
Source: Donated by George-De-Vey
System of arrangement: Catalogued according to type
Subjects: Fairgrounds, Travelling Entertainment, Fairground organs, Transport, Fairground Rides, Fairground Art, Family Collections, Showpeople
Conditions of access: Items are available to view by appointment in the NFA reading room
Restrictions: None
Copyright: Reproduced with the permission of George-De-Vey. Copies may be supplied or produced at the discretion of National Fairground Archive, subject to copyright law and condition of the material
Finding aids: Online finding aid available here