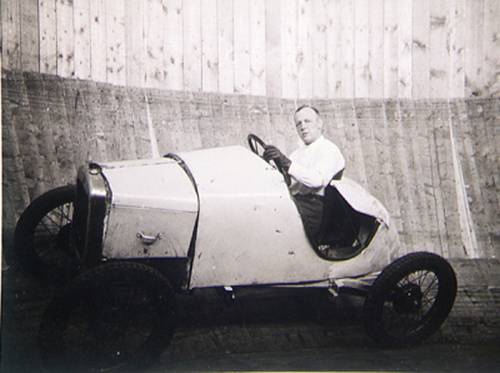 Scope: This collection comprises photographs, handbills, newspaper reports and financial records relating to Billy Bellhouse and his life as a wall of death rider as well as other performers.

Administrative / biographical history: William Bellhouse (1907-1980), aka Cyclone Billy, was a speedway rider and dare devil motorcyclist from Sheffield. Billy travelled throughout Europe on a Wall of Death show between 1932 and 1935. His main speciality was the Globe of Death, on which he performed gravity defying leaps on his 'Indian' motorbike.

Billy showed an interest in motorbikes from an early age, after holding various jobs in his native Sheffield, he started working as a mechanic aged 17. Two years later, he became a member of the Millhouse Motorcycle Club. During the late 1920s Billy worked as a chauffeur and mechanic and was riding motorbikes on dirt tracks on his spare time and by 1929 he was a member of the Northern Association of Track Riders.

In the 1931-1932 season, Billy was engaged to work for the showman F. Sedgewick as a Globe of Death rider at Kelvin Hall, in Glasgow. Billy appeared on Sedwick’s advertising bills under his pseudonym, Cyclone Billy, together with Fearless Fred Farrow. Soon after launching his career as a professional stunt rider, he was touring his act around Europe, as far as Poland, Hungary, Romania and Gibraltar.

During his five-year career, Billy rode at break-neck speed around both the Wall of Death and the Globe of Death. His death-defying stunts made audiences gasp with amazement, and the show never failed to attract large crowds. Billy was paid 60% of the takings and a share of the tips.

The Globe of Death was Billy’s biggest challenge. This was where he performed his most dangerous stunts. The motorbikes used for the globe of death did not use gears, instead they were fixed and once the rider let the clutch in, the bike rode at a set speed. While performing in Spain in 1935, Billy went into the globe cage as usual and while attempting to do the loop he came off the bike. Billy fell to the bottom of the cage and the motorbike followed suit, striking him on the shoulder and taking the flesh away as the wheel continued spinning until help arrived. The wheels continued spinning because the engine could not disengage by itself. Through the course of his riding career, Billy had several accidents, but it was this last one, which forced him to give up his career as a stunt rider in 1935.

Billy had married Elsie Swift (b.1906) the previous year and they had a son, James Anthony ‘Jim’ (d.2000). Upon retirement, he returned to Sheffield, where he opened a fish and chip shop, which his son Jim and descendants continued running until closing in 2016.

Cyclone Billy lived a quiet life until his death in 1980, aged 73. Although his love of motorbikes continued, he never performed on the Wall of Death again.