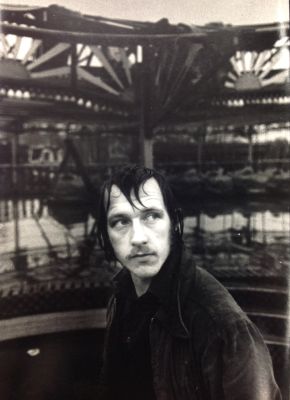 Administrative / biographical history: Robert Matthew Chase (Bob) was born in 1957. Growing up in King’s Lynn, Bob was exposed to the historic King’s Lynn Mart fair. King’ Lynn Mart being the first fair of the year, has always been very important for the showmen as it opens the travelling season.

Every year, the Mart, impregnated the whole market place and adjacent streets with the smell of toffee apples and the sound and light of the rides in February, which left a long lasting impression in Bob’s memory.

In 1975, aged 18, Bob enrolled at Harrow School of Photography in London, now part of Westminster University. He attended the Advanced Diploma in Photography course for the next three years, and the photographs contained in this collection are part of his final year graduation project.

The project was inspired by Bob’s childhood memories of the fair and the strong relationship between the travelling fairground and King’s Lynn, not just through the Mart but also through the Savages Engineering company, which fabricated fairground rides and equipment for the showmen in the town. Additionally, Bob has distant family links to the Gray and the Roper showmen families, which also interested him from a personal point of view.

His approach to the project was one of contrast between the frivolous excitement and bright lights of the fairground, as experienced by the fairgoers, and the hard work and contrasting lifestyle of the showmen and workers. Bob, used black and white prints to intensify this contrast, creating atmospheric and emotionally charged representations of the life behind the scenes and humanising the impersonal event that is the funfair or a mechanical ride where everything is about the rides and stalls and nothing is about the people.

The photographs were taken at fairs in various location including; King’s Lynn, Norwich, Ealing and Northampton among others, and winter quarters during 1977-1978. During this period, Bob stayed close to the fairgrounds in order to capture the setup and take down of the fair. Many families worked with him in the project and sometimes he was even invited to sleep in the staff caravans with the workers.

‘The families were generous to me and largely appreciated that I was doing my best to represent aspects of their culture and life other than the bright lights and music that visitors see.’