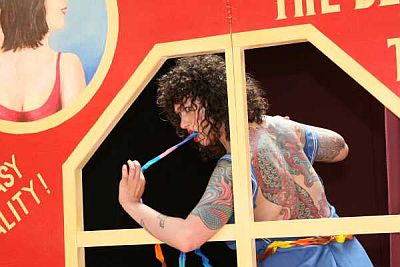 Scope: This collection contains programmes, posters and handbills relating to Marisa Carnesky. A number of items relate to Carnesky's Ghost train development and items from the exhibition 'Memoirs of a Showwoman' which ran from February to May 2011.

Administrative / biographical history: Marisa Carr works under the stage name Marisa Carnesky. She has been at the forefront of innovative theatre practice and new circus for over a decade and has received the Laurence Olivier Award-Best Entertainment 2004, Edinburgh Festival Herald Angel Award 2005 and Time Out- Best Theatre 2004.

Originally trained as a ballet dancer, Marisa went on to study Performance and Fine Art at the University of Brighton. Since graduation she has shown her work worldwide, from solo shows; Jewess Tattooess and Magic War, to larger scale works and group shows. Her best known and biggest show, Carnesky´s Ghost Train, first seen in London´s Brick Lane in 2004, is now permanently situated at the Flagstaff Gardens, Blackpool.

Over the past decade Carnesky has been wowing audiences and critics alike with her spectacular shows, where experimental performance meets the traditional language of magic, burlesque and the fairground. Delving into strange worlds, Marisa´s work finds a voice for subjects both bizarre and serious, where disappeared daughters cross haunted borders and religious taboos are challenged.

For three years, Marisa Carnesky was the AHRC Creative and Performing Arts Fellow at the National Fairground Archive. To celebrate this fellowship, The University of Sheffield presented a spectacular exhibition and a feast for the senses, Memoirs of a Showwoman. Displays showcased costumes from Marisa´s shows, including the dress worn by Paloma Faith for Carnesky´s Ghost Train, collaborative work with artists such as Anthony Bennett and Mark Copeland, inspirations from the Archive and unseen material from her personal archive.