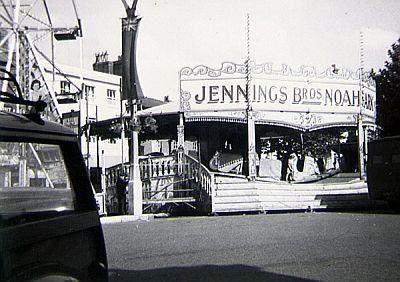 Scope: A collection of 309 photographs and negatives by David Cheverill from the 1960s of fairground scenes and artefacts and a letter of correspondence.

Administrative / biographical history: David Cheverill was a fairground enthusiast from Wiltshire, who collected photographs of fairground scenes and artefacts from his travels.

David, who died in 2009 in his late 80s, lived in Wiltshire for most of his life. It was during his boyhood at Trowbridge that he was introduced to the world of the travelling showman when, at the age of seven, he was taken to a circus by his father.

After wartime service in the Army he was in charge of boiler maintenance at a local food factory, where he remained until retirement.

During his lifetime he amassed a substantial collection of fairground photographs, many of which he had taken himself. David left 18 photographic albums on his Will to Graham Downie, formerly the Secretary of the Midlands Section of the Showmen's Guild, Editor of the Fairground Mercury and Chairman of the Fairground Association of Great Britain, who donated it to the National Fairground Archive.

Related Collections:
Source: Donated by Graham Downie
System of arrangement: Catalogued according to type
Subjects: Fairgrounds, Transport, Fairground Rides, Fairground Art, Travelling Entertainment
Conditions of access: Items are available to view by appointment in the NFA reading room
Restrictions: None
Copyright: Copies may be supplied or produced at the discretion of National Fairground Archive, subject to copyright law and condition of the material
Finding aids: Photographs available on NFA digital