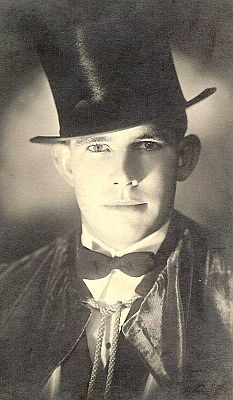 Title: The The Cyril Critchlow Collection

Scope: The Cyril Critchlow collection contains programmes, posters, handbills, books and magic journals, many of which relate to shows in Blackpool where Cyril resided and includes material on entertainment venues such as Blackpool’s North Pier, Central Pier, South Pier, Tower Circus and a small collection of programmes from other national venues. Additionally, it contains circus photographs and postcards mainly of the Ohmy Circus, including individual circus troupes and performers and other material such as newspaper cuttings and correspondence.

Administrative / biographical history: Cyril Critchlow was born in Staffordshire in 1923 and moved to Blackpool with his family as a teenager in the late 1930s. There the Chrichlow family run a guest house, which Cyril himself managed for 40 years.

Cyril developed an interest in magic from an early age and became known as a magician during the Second World War under the stage name of Reval.

Throughout his life in Blackpool, Critchlow became an avid collector of ephemera relating to Blackpool’s entertainment heritage from the 1860s to the present day and wrote several books on the subject. He was also a passionate heritage campaigner and in 1977 he fulfilled a lifelong dream when he opened The Museum of Entertainment on Coronation Street, where he displayed his personal collection of entertainment ephemera.

Critchlow had a colourful career both in the entertainment sector and beyond. He presented magic shows and gave talks on Blackpool history of entertainment at the ‘Witches Café’ which he also ran. In 1980 he became the proprietor of a small theatre of variety and he even worked as a spotlight operator at the Winter Gardens Theatre for a while. In the mid-sixties he was elected town Councillor. Additionally, he was a founder member of the Blackpool Magicians’ club, becoming at one point President and Honorary Life Member. He was a member of Equity, The Magic Circle, Blackpool Heritage Forum and he was President of the North West Music Hall and Variety Friendship Society.

He was still entertaining with his magic act in his 80s performing as Wizardo, Harry Potter's grandfather and took part in Sheffield University’s Cabinet of Curiosities held at Blackpool in 2008.

Cyril Critchlow died after a short illness in 2008. At the time of his death he was working on several books, including a history of Blackpool Central Pier.

The core of the Cyril Critchlow collection is held in the Local and Family History Centre at the Blackpool Central Library.

Related Collections: The Cyril Critchlow Collection at Blackpool Central Library, Argyle Theatre Collection, Hodson Family Collection
Source: Donated by Cyril Critchlow during his lifetime. Further donations from his son after his death
System of arrangement: Catalogued according to type
Subjects: Magic, Circus, Variety and Music Hall, Performers, Travelling Entertainment, Speciality Acts, Seaside Entertainment, Fixed Entertainment Venues, Business
Conditions of access: Items are available to view by appointment in the NFA reading room. Books and journals are listed on the University catalogue, Star Plus
Restrictions: Not all film material is available for viewing due to preservation conditions
Copyright: Copies may be supplied or produced at the discretion of National Fairground Archive, subject to copyright law and the condition of the item
Finding aids: Photographs available on NFCA digital. Online finding aid available here.