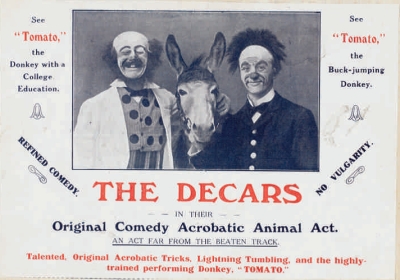 Scope: This collection contains black and white photographs and postcards of several generations of the Decar family with a strong focus on John Decar and his act as Decar and Tomato. It also includes other circus performers as well as autograph books and a scrapbook

Administrative / biographical history: This collection covers twenty years in the life of the circus and variety act operating from 1911 to the late 1920s.

In 1911, the Decars were an acrobatic duo, formed by John Decar and Frederick William Evans aka Pimple, whose clown-style costumes, complete with white-face, provided the foils for the star of the show, the extraordinary donkey named Tomato.

Tomato was indeed a very clever, though temperamental, donkey. He could waltz on his heels, be commanded to lie down, trot and then gallop around the stage. Tomato was described consistently as the funniest and most educated donkey in the world. According to ‘The Sun’ newspaper, Sunday 20th December 1913, he was perhaps the most travelled donkey in existence, having worked in all the principal European cities as well as in America, South Africa, the East, Australia and New Zealand. He could supposedly understand French, German, Spanish and Portuguese equally as well as English.

John Decar was a descendant of the Leglere family of acrobats, who developed the Decar and Tomato act because of the fierce competition between acrobats at the time. Allegedly it took Decar over five years to train Tomato, throughout that time he wore a thick leather suit to protect himself from bites, despite his efforts, however, Tomato managed to send him to hospital no less than three times (Martin & Rodgers’ European Wonder Show and Vaudeville Circus souvenir programme).

By 1914, John Decar married Kiz who was a onetime apprentice to the Bailey's cycle act, and it seems that she took on one of the Decar and Tomato act white-face roles.

By 1927, at the Exeter Hippodrome, Decar and Tomato appeared as the Decar’s Miniature Circus, together with clown and animal trainer Micky Maxi presenting trained monkeys, dogs and geese and travelled this act until John and Kiz retired in 1949.