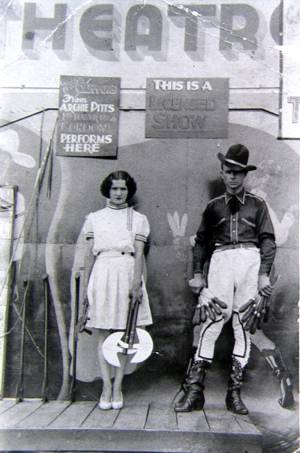 Scope: This collection contains photographs, business papers, newspaper cuttings typed pages and notes (probably for an autobiography) with some correspondence about a proposed book. There are also some costumes and props.

Hal was born in 1909 to one of the most successful showmen of the 19th century and followed the family tradition into the travelling entertainment business to become a renowned star on both sides of the Atlantic, appearing in films and rodeos in America during the 1930s and 1940s.

Hal was a very successful and versatile entertainer. He performed in a Wild West speciality act as both a knife-thrower and cowboy and his early career involved working on the fairgrounds with his family. His skills quickly catapulted him into the world of variety, acting and circus. He appeared in many films and rodeos in America and Europe next to big cowboy names such as Tex Ritter and William Boyd. He was also a guest on The Johnny Carson Show and appeared on the Ed Sullivan Show together with Elvis Presley and Gene Autry. He worked in variety with Dick Henderson, 'Hutch', Morecambe and Wise, Edith Piaf, Tony Martin, Dorothy Dandridge and Denise Darcel amongst others and worked in some of the most important circus rings of the time such as Ringling Bros and Barnum & Bailey in the United States and the Blackpool Tower and Billy Smart's Circus in England.

Between stage tours in variety, Denver also formed his own travelling circus, using names such as 'The Silver King Circus', 'The South African', 'The Royal South African Circus', 'The New Era Circus' and 'The Great American Circus'. In their heyday, the Denvers appeared in leading theatres such as the Sahara Hotel in Vegas and the Palace Theatre on Broadway.

After his third wife, Olga Frei, left the circus, Hal returned to cabaret and theatre work, and later concentrated on film and television work, appearing in Emmerdale and Coronation Street.

Hal spent his entire life in show business until his death on the eve of filming a new television programme in 1994.