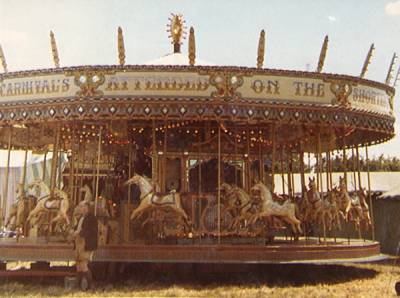 Scope: A collection of 154 colour and black and white photographs.

Administrative / biographical history: Bill Garbett was a Birmingham man whose interests embraced the fairground, particularly fairground organs, and railways. During the 1950s he photographed some of the Pat Collins firm’s steam engines during their final days in use on the fairground.

His passion for fairground rides is reflected in the images which feature in this collection, especially of those of Carter's fair in the 1980s. The early black and white photographs were collected from other photographers and feature examples of fairground transport, however, most images were taken by Bill Garbett. Later colour photographs show a variety of fairground rides including Carter's Gallopers an Octopus and Arthur Stevens' Lighthouse Slip circa 1986 and scenes of fairs such as Nottingham Goose Fair.

Source: Donated through Graham Downie
System of arrangement: Catalogued by type
Subjects: Fairgrounds, Travelling Entertainment, Transport, Fairground Rides, Fairground Art
Conditions of access: Items are available to view by appointment in the NFA reading room
Restrictions: None
Copyright: Various according to image. Copies may be supplied or produced at the discretion of the National Fairground Archive, subject to copyright law and condition of the material
Finding aids: Photographs available on NFA Digital