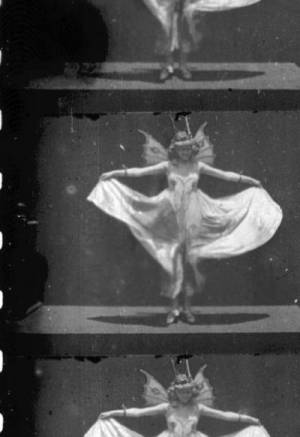 Scope: Collection of early films related to the first year of film-making in America and the United Kingdom and nineteenth century magic lantern slides, letter, film catalogues and photographic plates.

Administrative / biographical history: George Williams (1863-1945) was a showman who toured the British fairgrounds in the mid-1890s. His show consisted of a magic lantern performance, an Edison phonograph and a small film show, all of which took place in a freak show tent at Hull Fair in the North of England.

George Williams was born on 23rd January 1863 in Islington, London to William Thomas Williams, a domestic servant and Marianne Adderson. The eldest of six children George showed a talent for making things from an early age and started to make a career as a sign writer and trainee master in the shipyards at Kings Lynn.

In 1887 George married Edith Jane Daisley. Edith came from a prosperous family who owned a Bakers and Grocery shop in London. Edith's parents disapproved of her choice of husband, not only because he came from a less affluent background but also because he had a reputation as a bit of a scoundrel. George and Edith had nine children, two of which died, one at birth and another one before reaching adulthood.

It is believed that George’s career as a showman started in the late 1800s travelling the fairground scene with Pat Collins’ Fair. George started by painting the attractions and giving film and Lantern Slide Shows and by October 1896 he was travelling a Cinematograph.

George settled in Birmingham circa 1899, by that time he was already a maker of cinematography and slides. He also wrote music and hymns for the Primitive Methodist Church in Kings Lynn, of which he was a member.

George continued his trade as a sign writer while in Birmingham, where he worked on the trams as well as on small carriages and handcarts. George also worked as a photographer for Deresk photographic studios taking images of the city and its people.

Edith helped manage the family business interests by keeping the books and collecting payments. Between 1904 and 1914 she inherited money and estate from both her mother and grandmother. In both instances Edith’s family included clauses on their Wills excluding George from any rights on the inheritance both because of his reputation and his various failed financial and business ventures.

George continued to show his Lantern slide shows in church halls and other static venues around Cotteridge until the early 1900s when the family moved to the Old Lodge House at Breedon’s Cross, Stirchley where George set up a bicycle repair business with his oldest son.

George worked in the family business into his late years repairing and building trolleys for Cadbury brothers and died on 8 November 1946. He was a man of many talents amongst others poetry writing, drawing, sign writing, music playing and composing, and photography. Edith died on 1st January 1952.

This collection of films has framelines consistent with those of Robert Paul and Birt Acres, pioneers of the Kinetoscope in the United Kingdom and Edison Kinetoscope.

The last four British films in the Williams Collection have not been fully identified yet. Two of these, of which only fragments survive, have been provisionally titled ‘Family Group’ and ‘Yarmouth Fishing Boats Leaving Harbour’. The other two date from 1896 and have also been assigned provisional titles and dates associated with Acres, ‘Landing at Low Tide’ or ‘The Lady and the Boat’ and ‘Boxing Match’.

All six Edison films in the George Williams Family Collection were shot in the Black Maria motion picture studio in Orange, New Jersey, and are from the Kinetoscope era. The earliest, ‘Sandow [no. 2]’, was shot in March 1894 while the most recent, ‘New Bar Room’, was filmed in January 1895. These were brought to England and sold on the open market by the Continental Commerce Company, aka Maguire & Baucus, who then controlled the rights to Edison's Kinetoscopes and films outside the United States and Canada.

Four of these films are newly discovered titles, though only one was in some sense entirely 'lost'. These films underscore the complexity of establishing a definitive filmography of early Edison films since scenes were often filmed in a single negative and when damaged, re-filmed, whereas on other occasions multiple takes of a performer were filmed and several separate films produced with titles such as ‘New Blacksmith Scene’ and ‘New Bar Room’.

Other titles held in the collection are ‘Carmencita [No.2]’ who was the first female star to appear before Edison's Kinetograph camera, ‘Shadow [No.2]’ , ‘Annabelle Butterfly Dance’, ‘Hornbacker-Murphy Fight’, from which only one round of this five-round boxing contest was previously known to have survived, and this new round is probably the final one, ‘Annie Oakley’, and ‘New Bar Room’.