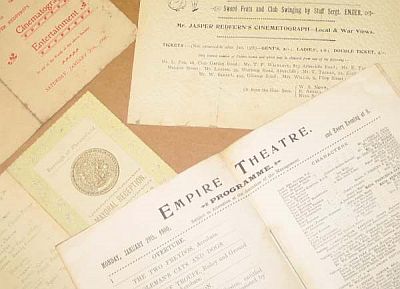 Administrative / biographical history:  Fred Holmes (1878-1851), was an instrumental manager throughout Redfern's career, in charge of a number of itinerant shows, and later permanent shows.

Fred Holmes was born in Dronfield, Chesterfield in 1878. He started working with Jasper Redfern around 1894 becoming proficient in photography then developing to become a 'Skilled operator' of animated pictures, a camera man and projectionist.

From 1900 to 1905, he travelled extensively with Jasper Redfern and was the manager for Redfern's vaudeville and animated picture shows. Including the two seasons at Redfern's 'Palace by the Sea' in Southend where he took stills and some movies. When Jasper Redfern set up the first picture house in Sheffield, Holmes became the manager as well as general manager for Redfern's various enterprises around the country.

Redfern and Holmes parted ways in 1912 when Redfern's business folded in 1912 but Holmes was retained as manager of the New Central Hall Cinema, which was named the Tivoli in 1913.

From 1914 until his retirement in 1937, Holmes was the manager of the Heeley Electric Palace on Chesterfield Road. In 1939 he moved to Tupton, Derbyshire and worked at Rawson's brewery, Sheffield during the war.

Jasper Redfern (1871-1928), was trained as a photographer but established a sideline as one of the earliest adopters of the cinematograph in the North of England. With a Kineopticon (a projector supplied by Birt Acres, a pioneer of cinematography) he presented a double-bill of film and x-ray demonstrations at the Sheffield YMCA in September 1896. An interactive and intimate show, the portability of the new device meant that Redfern could readily capitalise on public interest in the invention, and immediately target the smaller towns and venues overlooked by the major cinematograph tours.

A one-off show during the interval of a local Christmas pantomime gave Redfern his first break into the music hall circuit, and a regular supply of new and topical material ensured that he could present a new show to any venue he returned to. With an interest still vested in his photography studio, Redfern presented film without the constant pressure to travel and find new audiences.

In 1898, Redfern obtained exclusive contracts to tour the prominent film of the Corbett and Fitzsimmons boxing match of 1897. This, along with a number of high profile films of local sports events, marked a step towards the headline feature as an event in itself, and with a view towards securing return audiences week after week.

Redfern also tapped into new markets outside the scope of conventional exhibition by offering a complete evening's entertainment to church groups, clubs and societies. Outside the catchment of local and trade press, the practice introduced new audiences to cinema for the first time and, in combination with specially commissioned local titles, helped cement a public affiliation to the new medium.

Frustrated by the limitations of the music hall circuit and having thoroughly exhausted many of the non-theatrical spaces in and around Sheffield, Redfern struck into new territory in 1904 by pitching his own theatre on a beach outside Southend. With deckchairs for stalls, and a tent to cover the rafters Redfern brought his own programme of film and variety performers to the seaside resort for the summer. The venture successfully addressed a niche in the still open market, yet the concerns of the local licensing authorities over the non-permanent structure ultimately made this a short-term venture and it ran for two seasons.

Redfern's business grew through the following years, at one time holding the lease to four large near-permanent cine-variety shows in cities across the UK. As the industry moved towards larger distribution chains and a system of film rentals, Redfern's approach struggled to adapt to audience and market expectations. As the 1909 Cinematograph act enshrined the fixed-venue cinema show, Redfern's place in the market dwindled, unable as he was to find the financial stability to grow and remain relevant in the face of growing competition.

As the industry grew beyond the scope of a single operator, the entrepreneur eventually returned to his original second act, as an experienced x-ray photographer. Following duty as a field radiologist in the War, Redfern settled as a radiologist at the Grangethorpe hospital in Manchester.

Related Collections: George Williams Collection, Birt Acres Collection
Source: Donated by Roger Waterhouse, Grandson of Fred Holmes
System of arrangement: Catalogued according to type
Subjects: Early Film, Travelling Entertainment, Showpeople, Seaside Entertainment
Conditions of access: The photographs within this collection need to be catalogued and are not available. Some items are in conservation and are not available at the moment
Restrictions: None
Copyright: Copies may be supplied or produced at the discretion of National Fairground Archive, subject to copyright law and condition of the material
Finding aids: Online finding aid available here