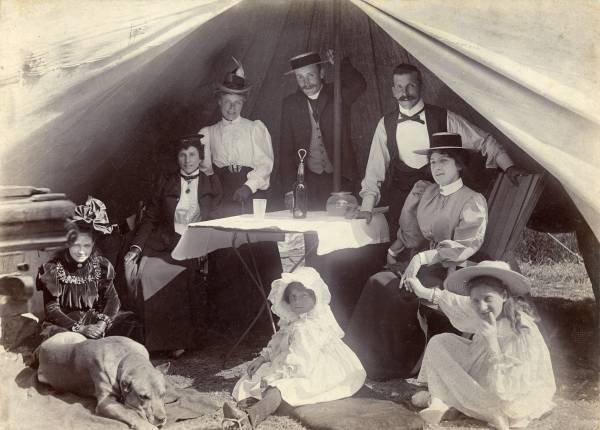 Scope: This collection contains black and white photographs related to Joseph Charles Heather, the Sanger circus and the Bostock Jungle

Administrative / biographical history: Joseph Charles Heather (1873-1953) was a veterinary of Irish origin, born at Newry, Ireland. He qualified with honours at the Royal Veterinary College, Edinburgh in 1895. His first appointment was as an assistant at Newbury, Berkshire and afterwards became Assistant to Mr. Rossell at Sandiacre Hall.

Between c.1897 and 1898 Joseph Heather toured with George Sanger’s circus and menagerie for two years, where he worked as a veterinary surgeon for the showman and gained invaluable experience treating wild animals.

After leaving the circus, he practised in Ireland for about a year, where he was Chief Veterinary Officer and Inspector of Diaries to No.1 District Council of County Down. In 1900 he returned to Sandiacre, where he took over Mr. Rossell’s practice.

Throughout his career he held various positions, including President of the Derbyshire veterinary Association, Veterinary Surgeon at Long Eaton Council and Veterinary Inspector under the Contagious Diseases of Animal Acts to the Ilkeston and the Long Eaton Petty Sessions Division additionally during WWI Joseph Heather was veterinary surgeon to the War Office.

Between 1921 and 1928 Heather was Veterinary Inspector of Dairies and Cow Sheds to the Beeston Council and Honorary Veterinary Surgeon to numerous societies. He was also an authority on hunters, as a hunt veterinary surgeon and at one time he served as the Earl of Harrington’s veterinary.

Heather also did a considerable amount of research work and introduced with success many new treatments, including one for burns. Heather was also an enthusiast photographer.

Heather married Miss Florence Andrews, who died in 1951 and had two sons and a daughter. John Francis Heather, a civil engineer and Ernest Joseph Heather a veterinary surgeon.

George Sanger started his circus in a small way, with his brother John (1816-1889), in 1854, at the King's Lynn Charter Fair, using as performers a group of family friends and two nieces. By 1858 he had added six lions and then elephants to the show which proved to be a big success.

From 1874 he also presented tenting shows on the Continent for fifteen seasons. By 1895, he was travelling 160 horses, eleven elephants, a dozen camels and about 330 performers and other employees. Sanger claimed that his huge success on the Continent was due to the variety of the programme, as other circuses were dominated by equestrian acts in permanent buildings. Sanger's shows presented novelty, wild animals and mass entertainment to the general public and by 1871 his fame and fortune was such that he acquired Astley's Amphitheatre, which he continued to run with his brother until 1893.

George Sanger was the first President of the Showmen's Guild of Great Britain, post which he held between 1890 and 1909.