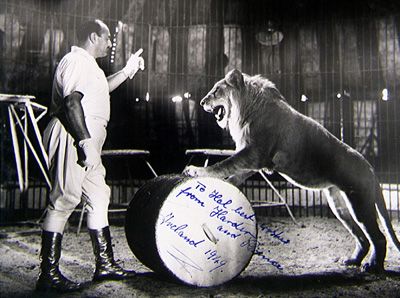 Scope: The collection comprises photographs relating to this life as an animal trainer and his time with circuses such as the Riskett Circus, Chipperfields and Jeserich Circus.

Administrative / biographical history: Harder Jonsson was born in Sweden on 19 May, 1912 and brought up with his sister Inga in Berlin. After the death of his father, a horse trainer, his mother married again and Harder and Inga were educated in ballet, music and the circus arts in the old Busch building in Berlin by their grandmother. According to his former beast man, assistant and long time friend, Hal Fischer, Harder was a versatile man of all trades but circus was his first love. Perhaps his most famous performance was when he trained seven lions in an act for Jeserich Circus in 1949 where the reviewer stated: "I have seem many lion tamers in action but never before have I witnessed such a polished, perfectly timed performance as that presented by the great Harder."

The photographs demonstrate the life and career of this truly versatile circus man including the fourteen lion act he performed with Chipperfields with whom he stayed for five years as a ringmaster and animal trainer. The Pertinent Penman writing in the World's Fair in the 1950s wrote the following tribute:

There is something remarkable about the career of generously proportioned, yet very active, Harder Jonsson. He is the true son of the circus by virtue of his ancestry and early boyhood ... If the Pertinent Penman looks upon Jonsson as a bit of a genius, don't run away with the idea that he's indulging in a spot of journalistic fancy. Not a bit of it; Harder comes with the orbit of genius.

Harder left the ring in the 1960s because he wanted to be remembered at the peak of his career, and apart from working weekends at Windsor Safari Park, he never returned to the circus. He died in 1979 and according to Hal Fischer with his passing the circus world was considerably poorer.