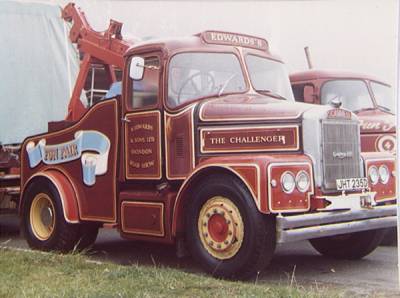 Scope: A collection of 189 photographs, mainly colour, some black and white of fairground transport. They have been taken by a variety of photographers, including Rod Spooner.

Administrative / biographical history: The Rev Frank Larkworthy was born and brought up in South Devon at or near to Newton Abbot. The annual visit there each August bank holiday of Anderton & Rowland's fair, including the spectacular Golden Dragons Scenic, inspired his lifetime interest in travelling fairs.

His first career was working for a major biscuits manufacturer. As national sales manager he pioneered the introduction of own-label biscuits into the supermarket chains.

A change of direction during the 1960s saw him train as a minister in the United Reformed Church. His first parish was in south Wales but he later moved to Wiltshire where he remained for the rest of his life. It was whilst at Westbury that he became chaplain to the Western Section of the Showmen's Guild. His enthusiastic support of all travelling showmen was such that, in 1988, he was able to persuade BBC Television to record an edition of Songs of Praise on the fairground at Witney Feast. He died in retirement at Devizes in 1992.

Related Collections: Showmen’s Guild Collection
Source: Donated by the Fairground Association of Great Britain
System of arrangement: Catalogued by type
Subjects: Transport, Fairgrounds, Travelling Entertainment, Fairground Rides
Conditions of access: Items are available to view by appointment in the NFA reading room
Restrictions: None
Copyright: Copies may be supplied or produced at the discretion of National Fairground Archive, subject to copyright law and condition of the material
Finding aids: Photographs available on NFA Digital